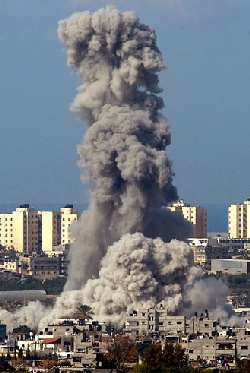 he United Nations’ most senior human rights official said last night that the Israeli military may have committed war crimes in Gaza. The warning came as Israeli troops pressed on with the deadly offensive in defiance of a UN security council resolution calling for a ceasefire.

Navi Pillay, the UN high commissioner for human rights, has called for “credible, independent and transparent” investigations into possible violations of humanitarian law, and singled out an incident this week in Zeitoun, south-east of Gaza City, where up to 30 Palestinians in one house were killed by Israeli shelling.

Pillay, a former international criminal court judge from South Africa, told the BBC the incident “appears to have all the elements of war crimes”. [continued…]

When the first accounts emerged this week of what the Israeli armed forces did to the extended Samouni clan in Gaza they were initially lost in an already crowded chorus of civilian suffering.

But as more survivors surfaced to give largely consistent testimony the horrific realisation emerged what happened to the Samouni family could constitute war crimes by Israel.

Israel is barring foreign journalists from Gaza so it is difficult to verify completely the survivors’ accounts about an incident that left up to 70 civilians dead.

They contain allegations that Israeli forces shelled a building where they had previously put a large number of civilians, killed a child in cold blood, used human shields and failed to provide proper treatment to survivors. [continued…]

Israel’s current assault on the Gaza Strip cannot be justified by self-defense. Rather, it involves serious violations of international law, including war crimes. Senior Israeli political and military leaders may bear personal liability for their offenses, and they could be prosecuted by an international tribunal, or by nations practicing universal jurisdiction over grave international crimes. Hamas fighters have also violated the laws of warfare, but their misdeeds do not justify Israel’s acts.

The United Nations charter preserved the customary right of a state to retaliate against an “armed attack” from another state. The right has evolved to cover nonstate actors operating beyond the borders of the state claiming self-defense, and arguably would apply to Hamas. However, an armed attack involves serious violations of the peace. Minor border skirmishes are common, and if all were considered armed attacks, states could easily exploit them — as surrounding facts are often murky and unverifiable — to launch wars of aggression. That is exactly what Israel seems to be currently attempting. [continued…]

A plan to create a new foothold in Gaza for the Palestinian Authority and to bring in international monitors was being drawn up by diplomats yesterday as a UN ceasefire call was dismissed by both sides.

The plan would allow a return of the authority, led by the secular Fatah faction, to the territory 18 months after it was expelled by the Islamist Hamas. Diplomats are considering taking a triangle at the southern end of Gaza, including the Rafah crossing to Egypt and the Kerem Shalom crossing to Israel, to be policed by Turkish and French military monitors to stop arms smuggling into Gaza.

The zone would nominally be controlled by the authority, the internationally recognised Government. Such a plan would allow the crossings to reopen for the first time since Hamas seized power in Gaza in June 2007. [continued…]

Al Jazeera: Praying in defiance of Israel’s war in Gaza

On Friday, as Israeli forces continued a two-week-old offensive against Hamas, the armed Islamist movement that controls Gaza, scores of Egyptian doctors emerged from their union building in downtown Cairo. They clutched posters reading “Gaza Is Dying” and banners demanding the opening of the Rafah border crossing. One demonstrator held a baby doll, symbolizing a Palestinian child, in a white sheet covered with fake blood.

Black-clad riot police stood before them, grim-faced in their black helmets. Brandishing clubs, they blocked the protesters from entering the street.

“O Hamas, O Hamas, you are for all the people. We are behind you,” the protesters chanted. Then they went after Mubarak.

Major Gen Uzi Dayan, the former Chairman of the Israeli National Security Council, said Israel’s real goal should be to surround the Gaza Strip and “dismantle” the Hamas regime.

Asked who would run Gaza in its place, Gen Dayan said this was none of Israel’s business.

“I prefer a vacuum to what is there now,” he told me.

Gen Dayan was giving his own view, not the official Israeli position, but as Israeli troops press home their campaign inside the Gaza Strip, and diplomacy fails to bring the conflict to an end, some are wondering whether Israel really knows where it is heading. [continued…]

Throughout the two-week bombardment of the Gaza Strip most journalists have been kept out by the Israeli government on the pretext of security. And the Israelis are pleased with the results.

Foreign journalists have been forced to report without getting to the detail of what is going on. That meant, at least in the early days of the bombardment, that reporters who would have been in Gaza were instead reporting from Israeli towns and cities under fire from Hamas, and Israeli officials found it easier to get themselves in front of a television camera.

An Israeli official told me they were delighted at a BBC TV correspondent broadcasting from Ashkelon in a flak jacket, reinforcing the impression that the Israeli city is a war zone when there is more chance of being hit by a car than a rocket. The notable exception is al-Jazeera TV, which has a bureau in Gaza City and has been broadcasting live from there. [continued…]

As Israel’s offensive in Gaza enters its third week, the Jewish state appears to be rapidly losing the public relations war abroad as criticism from United Nations officials and humanitarian agencies has mounted amid the constant stream of pictures of dead and wounded women and children.

Israeli strikes on UN convoys and schools sheltering hundreds of Palestinians who fled their homes, as well allegations that Israeli troops prevented medical workers from retrieving dead and injured Palestinians, have increasingly called into question Israel’s conduct of the war. [continued…]

A majority of the Jewish public in Israel opposes a ceasefire in Gaza without kidnapped soldier Gilad Shalit’s release, according to the monthly War and Peace Index poll conducted about a week and a half after the start of Operation Cast Lead.

Beyond the decisive support for the Israel Defense Forces’ operation, the public also backs the raid’s continuation even if Hamas holds fire under certain conditions.

The respondents were asked, “If a ceasefire agreement with Hamas could be reached, but without including Gilad Shalit’s release, do you believe Israel should or should not sign such an agreement?” About 76.5% gave a negative answer, while only 17.5% responded positively. [continued…]