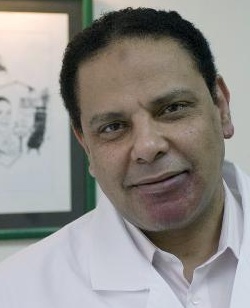 e saw Mr. Obama as a symbol of this justice. We welcomed him with almost total enthusiasm until he underwent his first real test: Gaza. Even before he officially took office, we expected him to take a stand against Israel’s war on Gaza. We still hope that he will condemn, if only with simple words, this massacre that killed more than 1,300 Palestinians, many of them civilians. (I don’t know what you call it in other languages, but in Egypt we call this a massacre.) We expected him to address the reports that the Israeli military illegally used white phosphorus against the people of Gaza. We also wanted Mr. Obama, who studied law and political science at the greatest American universities, to recognize what we see as a simple, essential truth: the right of people in an occupied territory to resist military occupation.

But Mr. Obama has been silent. So his brilliantly written Inaugural Speech did not leave a big impression on Egyptians. We had already begun to tune out. We were beginning to recognize how far the distance is between the great American values that Mr. Obama embodies, and what can actually be accomplished in a country where support for Israel seems to transcend human rights and international law.

Mr. Obama’s interview with Al Arabiya on Jan. 27 was an event that was widely portrayed in the Western news media as an olive branch to the Muslim world. But while most of my Egyptian friends knew about the interview, by then they were so frustrated by Mr. Obama’s silence that they weren’t particularly interested in watching it. I didn’t see it myself, but I went back and read the transcript. Again, his elegant words did not challenge America’s support of Israel, right or wrong, or its alliances with Arab dictators in the interest of pragmatism.

I then enlisted the help of my two teenage daughters, May and Nada, to guide me through the world of Egyptian blogs, where young Egyptian men and women can express themselves with relative freedom. There I found a combination of glowing enthusiasm for Mr. Obama, a comparison between the democratic system in America and the tyranny in Egypt, the expectation of a fairer American policy in the Middle East, and then severe disappointment after Mr. Obama’s failure to intercede in Gaza. I thus concluded that no matter how many envoys, speeches or interviews Mr. Obama offers to us, he will not win the hearts and minds of Egyptians until he takes up the injustice in the Middle East. I imagine the same holds true for much of the greater Muslim world. [continued…]

Fadi Mustafa is a successful young PR executive. He has an office in Tel Aviv and another in the northern Israeli Arab town of Umm al-Fahm, where his family home is. He encourages other young Israeli Arabs to break through the glass ceiling of discrimination. He was what Israeli Arabs call a “straight back”, in contrast to a previous generation – the “bent backs” who were bowed down by the experience of the creation of the Israeli state and the wars that followed.

He will look any Israeli in the eye as an equal, he insists, and shows me a painting that was given to him by the Israeli artist Menashe Kadishman.

But right now Fadi is an angry man, enraged by the rise of Avigdor Lieberman and his Yisrael Beiteinu (Israel Our Homeland) Party.

On Tuesday, if all the polls are right, Lieberman will emerge as the most significant beneficiary of an Israeli general election campaign played out against the bloody background of the three-week assault on Gaza in which more than 1,300 Palestinians died, many of them civilians.

The rightwing Likud party of Benyamin Netanyahu will probably emerge as the winner ahead of the Kadima party of Tzipi Livni. But most Israelis also recognise the wider significance of the moment: these elections are likely to mark the emergence of a far-right force, with a racist anti-Arab agenda, as the country’s power broker. [continued…]

Guardian Video: ‘The Jewish majority should be afraid’

In mid-September, as Wall Street unwound and venerable financial institutions were brought to their knees, the mood inside the Manhattan law offices of Wachtell, Lipton, Rosen & Katz was decidedly celebratory.

After a weekend of whirlwind deal-making and emergency meetings at the Federal Reserve Bank of New York, John A. Thain and his team at Merrill Lynch had sold their troubled brokerage firm to the Bank of America Corporation, dodging the financial sinkhole that was swallowing Lehman Brothers.

But before Wachtell lawyers, who were representing Bank of America, signed off on the deal, they told Merrill’s lawyers that they wanted to be sure about just one more thing: the size of the bonuses that Mr. Thain and his colleagues would snare at the end of the year. A page was ripped from a notebook, and someone on Merrill’s team scribbled eight-digit figures for each of Merrill’s top five executives, including $40 million for Mr. Thain alone.

Although Merrill had been bleeding money all year — and would continue to do so — the bonuses weren’t, as Merrill executives later explained to colleagues, about that performance. Rather, they were fees for getting the merger done, akin to what investment bankers receive for blockbuster deals. Mr. Thain in particular felt he deserved a hefty payout for his deal-making heroics, according to five individuals with detailed knowledge of the situation who requested anonymity because of their personal and business relationships with those involved.

A few weeks later, Merrill’s human resources director visited John D. Finnegan, the head of the compensation committee on Merrill’s board, and told him about the bonuses, according to four people briefed on the conversation. “That’s ludicrous,” said Mr. Finnegan, the chief executive of the Chubb Group of Insurance Companies. He thought that the lush bonus requests came across as greedy and insensitive — particularly because Wall Street was in such dire straits that it was likely taxpayer support would be needed to survive. [continued…]

Editor’s Comment — Hmm… Greedy and insensitive? Even though I don’t like the metaphorical equation of money with life, still, to call Thain and his accomplices bloodsuckers seems wholly appropriate. This isn’t just a pejorative; it’s a way of characterizing a worldview — one in which the parasite regards its own existence as somehow independent of the creature upon which it is engorging itself.

By insuring their own financial security, the captains of the financial industry have made sure that rather than — as a captain’s duty has traditionally been, to be the last one to disembark a sinking ship — the rule here is the captain gets to be the first one to step into the lifeboat.

Greedy and insensitive? No, more like depraved and inhumane.

What the centrists have wrought
By Paul Krugman, New York Times, February 7, 2009

I‘m still working on the numbers, but I’ve gotten a fair number of requests for comment on the Senate version of the stimulus.

The short answer: to appease the centrists, a plan that was already too small and too focused on ineffective tax cuts has been made significantly smaller, and even more focused on tax cuts.

According to the CBO’s estimates, we’re facing an output shortfall of almost 14% of GDP over the next two years, or around $2 trillion. Others, such as Goldman Sachs, are even more pessimistic. So the original $800 billion plan was too small, especially because a substantial share consisted of tax cuts that probably would have added little to demand. The plan should have been at least 50% larger. [continued…]

Daschle might well have been the best choice to lead health-care reform. But his honorable public record was instantly vaporized by tales of his cozy, lucrative relationships with the very companies he’d have to adjudicate as health czar.

Few articulate this ethical morass better than Obama, who has repeatedly vowed to “close the revolving door” between business and government and end our “two sets of standards, one for powerful people and one for ordinary folks.” But his tough new restrictions on lobbyists (already compromised by inexplicable exceptions) and porous plan for salary caps on bailed-out bankers are only a down payment on this promise, even if they are strictly enforced.

The new president who vowed to change Washington’s culture will have to fight much harder to keep from being co-opted by it instead. There are simply too many major players in the Obama team who are either alumni of the financial bubble’s insiders’ club or of the somnambulant governmental establishment that presided over the catastrophe. [continued…]

Can a hedge-fund island lose its shirt and gain its soul?
By Rebecca Solnit, TomDispatch, February 8, 2009

In December, reports surfaced that Treasury Secretary Henry Paulson pushed his Wall Street bailout package by suggesting that, without it, civil unrest in the United States might grow so dangerous that martial law would have to be declared. Dominique Strauss-Kahn, Managing Director of the International Monetary Fund (IMF), warned of the same risk of riots, wherever the global economy was hurting. What really worried them wasn’t, I suspect, the possibility of a lot of people thronging the streets with demands for social and political change, but that some of those demands might actually be achieved. Take the example of Iceland, the first — but surely not the last — country to go bankrupt in the current global crash.

While the United States was inaugurating its first African-American president, Icelanders were besieging their parliament. Youtube video of the scene — drummers pounding out a tribal beat, the flare and boom of teargas canisters, scores of helmeted police behind transparent plastic shields, a bonfire in front of the stone building that resembles a country house more than a seat of government — was dramatic, particularly the figures silhouetted against a blaze whose hot light flickered on the gray walls during much of the eighteen-hour-long midwinter night. People beat pots and pans in what was dubbed the Saucepan Revolution. Five days later, the government, dominated by the neoliberal Independent Party, collapsed, as many Icelanders had hoped and demanded it would since the country’s economy suddenly melted down in October.

The interim government, built from a coalition of the Left-Green Party and the Social Democrats, is at least as different from the old one as the Obama administration is from the Bush administration. The latest prime minister, Jóhanna Sigurdardóttir, broke new ground in the midst of the crisis: she is now the world’s first out lesbian head of state. In power only until elections on April 25th, this caretaker government takes on the formidable task of stabilizing and steering a country that has the dubious honor of being the first to drop in the current global meltdown. Last week, Sigurdardóttir said that the new government would try to change the constitution to “enshrine national ownership of the country’s natural resources” and to “open a new chapter in public participation in shaping the structure of government,” a 180-degree turn from the neoliberal policies of Iceland’s fallen masters. [continued…]