Will Clinton allow Israel to violate US sovereignty?
By Paul Woodward, War in Context, March 3, 2009 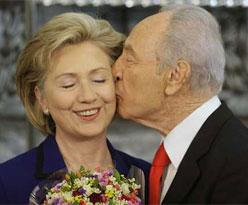 few weeks ago Ehud Olmert was bragging about his ability to dictate to President Bush how the US should vote in the UN Security Council. Now Israel is laying down “red lines” on how the US should negotiate with Iran.

What is surprising is not the degree of influence that Israel assumes it has over US foreign policy but that the Israelis choose to parade their power so publicly. Israel’s leaders are embarrassing the Israel lobby!

“I have no problem with what Olmert did,” Abraham Foxman, national director of the Anti-Defamation League, told The Forward in January. “I think the mistake was to talk about it in public.

“This is what friendships are about. He was not interfering in political issues. You have a relationship, and if you don’t like what is being done, then you go to the boss and tell him.”

And this is exactly how the lobby wants to frame US-Israeli relations: that they are based on a level of intimacy that allows Israel to discreetly petition its powerful friend.

Start telling “the boss” what to do and you risk becoming a cause of embarrassment. Keep doing it repeatedly and more and more Americans will understand why President Clinton once said in reference to then-Prime Minister Netanyahu: “Who the fuck does he think he is? Who’s the fucking superpower here?”

If anyone should be laying down red lines at this particular time — a time when it’s not clear whether the two-state solution is being rushed to the emergency room or the morgue — it is the US that should unequivocally be telling the Israelis: no more settlements.

Instead, it’s being reported that Israel has plans to double the number of Jewish settlers in the occupied territories.

When Hillary Clinton should be threatening to withdraw the diplomatic cover that the US provides Israel by perpetuating a phony peace process, instead, the Israelis are attempting to set ground rules on how the US should approach Iran.

Ironically, there is so far little indication that Israel need harbor much fear of rapprochement between the US and Iran. Clinton has already made it known that she sees little chance of talks being productive and the Obama administration in spite of having successfully used diplomatic engagement as an effective campaign gambit, has yet to demonstrate that it has a radically different perspective from the Bush administration. How so?

Whereas Bush treated talks with Iran as a reward that must be withheld, Obama is treating them as a reward that can be offered. The presupposition that in and of itself an opportunity to talk directly to Washington has inherent value, has not been questioned.

If talks are used as a bait, when Iran refuses to swallow the bait, the US and its allies will turn around and declare that Iran is unwilling to negotiate. While that might serve Israel and the US in persisting to cast Iran as a rogue state, it will merely confirm to the Iranians that there has never been a genuine interest in diplomatic engagement.

Real engagement hinges on the US credibly offering Iran positive rewards — not merely the offer that it can avoid being punished.

Effective diplomacy is driven by the belief that talking has the power to yield positive results; not the idea that failed talks can provide useful leverage.

In Israel’s efforts to circumscribe the reach of US diplomacy, items three and four of its “red lines” are particularly interesting:

3. A time limit must be set for the talks, to prevent Iran from merely buying time to complete its nuclear development. The talks should also be defined as a “one-time opportunity” for Tehran.

4. Timing is critical, and the U.S. should consider whether it makes sense to begin the talks before Iran’s presidential election in June.

Israel is terrified that the clock is running out — but it’s not the clock leading to a nuclear Iran; it’s the horrific prospect that Mahmoud Ahmadinejad could lose his position as a president who is easy to demonize and be replaced by Mohammad Khatami — the face of moderation.

If Khatami returns to the presidency, Benjamin Netanyahu is going to find it incredibly difficult to persuade anyone that the world faces a greater threat from Iran than it does from Great Depression II. Time is indeed running out.

9 thoughts on “EDITORIAL: Will Clinton allow Israel to violate US sovereignty?”