The missing Mandela
By Paul Woodward, War in Context, March 29, 2009 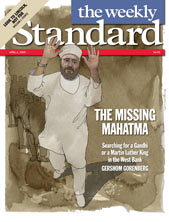 hen the long sought solution to the Israeli-Palestinian conflict is being trumpeted from the cover of The Weekly Standard there’s every reason to scoff. Middle East peace has thus far not appeared high up on the neoconservative agenda and I really doubt that Bill Kristol and his cronies suddenly had some extraordinary change of heart.

What’s sad is that Gershom Gorenberg, who is clearly a man of integrity, chose to lend his support to the Israel apologists who happily massage their consciences by pretending that Palestinian violence is the one insurmountable obstacle to ending the conflict.

In a celebration of Israeli impotence we are presented with a mirage of peace in the form of an unfound Palestinian Mahatma. If only a Palestinian Gandhi emerged, anything would be possible.

It’s not that the appeal of a saintly leader of a non-violent resistance movement is lost on me, but the parallels between British India and Israel are beyond tenuous.

Gandhi’s resistance to British rule galvanized the support of a massive population governed by a tiny colonial elite who never had the pretense that Britain was reclaiming a long-lost homeland. To the British, India was a land brimming with resources that could be shipped back to the actual homeland and traded for handsome profits. By the end of World War Two, Britain was bankrupt and in a rush to free itself of what had become its colonial burdens. With or without a gentle shove from the Mahatma, the sun had already set on the British Empire.

As for Gandhi’s nominal success in non-violently waving goodbye to colonial rule, we should not forget that it was accompanied by the horrific failure of partition and a bloodbath in which as many as a million people died.

Another model of non-violent leadership that Gorenberg could have considered is that of the Dalai Lama.

After fifty years of principled resistance to Chinese rule, Tibetans are still no closer to winning autonomy. Thus far, the majority of the Dalai Lama’s followers remain loyal to the religious values that he practices and advocates, yet many are starting to wonder whether it is their pacifism that enables China to retain its firm grip on Tibet.

Of course the most obvious model of political leadership that Gorenberg should have mentioned is that of Nelson Mandela.

The problem is — at least from Gorenberg and The Weekly Standard‘s point of view — Mandela resolutely refused to renounce armed resistance. Apartheid didn’t end because its opponents adopted a spiritually enlightened non-violent perspective. It ended because white South Africans were forced to recognize they were clinging on to a politically unsustainable system.

Israelis still cling on to a politically unsustainable situation, but unlike white South Africans, they are still able to hold on to a security blanket stitched together by American military and economic aid and political protection.

President Obama might say that for Palestinians and Israelis “the status quo is unsustainable”, but unless the US takes away the security blanket, Israel will remain in its manipulatively infantile condition: vacillating between a manicured helplessness that occasionally gets punctuated by a violent tantrum.

Must Israel and its friends wait in frustration for an elusive Palestinian Mahatma or instead might an earnest search for an Israeli FW de Klerk be long overdue?

3 thoughts on “EDITORIAL: The missing Mandela”