The truth about Richard Bruce Cheney
By Col. Lawrence B. Wilkerson, The Washington Note, May 13, 2009 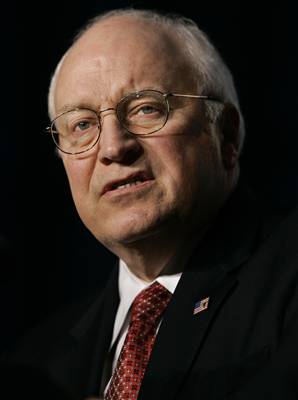 y investigations have revealed to me — vividly and clearly — that once the Abu Ghraib photographs were made public in the Spring of 2004, the CIA, its contractors, and everyone else involved in administering “the Cheney methods of interrogation”, simply shut down. Nada. Nothing. No torture or harsh techniques were employed by any U.S. interrogator. Period. People were too frightened by what might happen to them if they continued.

What I am saying is that no torture or harsh interrogation techniques were employed by any U.S. interrogator for the entire second term of Cheney-Bush, 2005-2009. So, if we are to believe the protestations of Dick Cheney, that Obama’s having shut down the “Cheney interrogation methods” will endanger the nation, what are we to say to Dick Cheney for having endangered the nation for the last four years of his vice presidency?

Likewise, what I have learned is that as the administration authorized harsh interrogation in April and May of 2002–well before the Justice Department had rendered any legal opinion–its principal priority for intelligence was not aimed at pre-empting another terrorist attack on the U.S. but discovering a smoking gun linking Iraq and al-Qa’ida.

So furious was this effort that on one particular detainee, even when the interrogation team had reported to Cheney’s office that their detainee “was compliant” (meaning the team recommended no more torture), the VP’s office ordered them to continue the enhanced methods. The detainee had not revealed any al-Qa’ida-Baghdad contacts yet. This ceased only after Ibn al-Shaykh al-Libi, under waterboarding in Egypt, “revealed” such contacts. Of course later we learned that al-Libi revealed these contacts only to get the torture to stop.

There in fact were no such contacts. (Incidentally, al-Libi just “committed suicide” in Libya. Interestingly, several U.S. lawyers working with tortured detainees were attempting to get the Libyan government to allow them to interview al-Libi….) [continued…]

Editor’s Comment — Conspiracy is notoriously difficult to prove, but can we go at least this far: Dick Cheney, the CIA and Libya all had a mutual interest in Ibn al-Shaykh al-Libi’s death. Might a mutual interest have gone as far as a mutual understanding? Might the former vice president have ever so discreetly let it be known that Libi’s sudden demise could send out a useful message to anyone else with a loose tongue?

Death in Libya, betrayal in the west
By Andy Worthington, The Guardian, May 15, 2009

News of the death, in a Libyan jail, of Ibn al-Shaikh al-Libi, a US terror suspect who was the subject of an extraordinary rendition, then tortured in Egypt and Jordan as well as CIA prisons in Afghanistan and Poland has, understandably, raised questions about whether he committed suicide – as the Libyan authorities claimed – or whether he was murdered. Just two weeks ago, representatives of Human Rights Watch saw him in Tripoli’s Abu Salim prison, and although he refused to speak to them, they reported that he “looked well.”

Al-Libi’s death should also raise uncomfortable questions for former US vice-president Dick Cheney, who is still turning up with alarming regularity on US television, peddling his claims that the use of torture saved America from further terrorist attacks. The focus on al-Libi should be a stark reminder that, when he was rendered to Egypt in early 2002, the CIA’s proxy torturers extracted a false confession from him – that al-Qaida operatives had received training from Saddam Hussein in the use of chemical and biological weapons – which was used not to protect the US from attack, but to justify the invasion of Iraq. The claim featured prominently in secretary of state Colin Powell’s presentation to the UN, just a month before the invasion began.

However, beyond the story of al-Libi’s mysterious death and of Dick Cheney’s role in torturing him to launch an illegal war – as documented by Moazzam Begg earlier this week – another disturbing aspect of America’s cosy relationship with Colonel Gaddafi, in the war on terror emerged in Human Rights Watch’s press release about al-Libi’s death. The organisation noted that its researchers had interviewed four other prisoners also rendered to Libya by the CIA, who reported that they had been tortured – by or on behalf of US forces – in Afghanistan, Pakistan and Thailand. [continued…]

In testimony that could bolster Speaker Nancy Pelosi’s claim that the CIA misled her during briefings on detainee interrogations, former Senator Bob Graham insisted on Thursday that he too was kept in the dark about the use of waterboarding, and called the agency’s records on these briefings “suspect.”

In an interview with the Huffington Post, the former Senate Intelligence Committee Chairman said that approximately a month ago, the CIA provided him with false information about how many times and when he was briefed on enhanced interrogations. [continued…]

Editor’s Comment — The CIA is immensely concerned about its image. It doesn’t want to appear to be a den of rogues. It wants to be seen as a bastion of upright patriots, but please, let’s get real.

What’s the appeal of joining an intelligence agency? Does the CIA find its recruits among those who believe in transparency in government; in full accountability and strict compliance with the law? Or is it looking for those drawn by the adventure of crossing boundaries, taking risks and avoiding getting caught? To be blunt, does intelligence work not actually appeal to a certain kind of grandiose criminality?

“Within the first hour of interrogation,” Soufan said, “we gained actionable intelligence.” Soufan could not say what that information was because it remains classified. Zubaydah had been injured during his capture, and Soufan’s team arranged for medical care and continued talking to the prisoner. Within the next few days, Soufan made one of the most significant intelligence breakthroughs of the so-called war on terror. He learned from Zubaydah that Khalid Sheikh Mohammed was the mastermind behind the attacks on 9/11.

Then, however, a CIA interrogation team from Washington led by a contractor arrived at the secret location. Zubaydah was stripped naked and the contractor began a series of coercive, abusive interrogations, based on Cold War-era communist techniques designed to elicit false confessions. During the Korean War, for example, Chinese interrogators employed the measures to get captured American pilots to make false confessions. “The new techniques did not produce results, as Abu Zubaydah shut down and stopped talking,” Soufan explained. “After a few days of getting no information, and after repeated inquiries from D.C. asking why all of a sudden no information was being transmitted … we again were given control of the interrogation.”

As Soufan and his team resumed their interrogation, Zubaydah revealed information about Jose Padilla, the alleged “dirty bomber.”

But after that, the CIA and the contractor again took over, using what Soufan called an “untested theory” that the Cold War techniques might work for getting good information. “Again, however, the technique wasn’t working,” Soufan recalled.

Soufan’s team was brought back yet again. “We found it harder to reengage him this time, because of how the techniques had affected him,” Soufan noted. “But eventually, we succeeded.”

A third time the CIA and the contractor team took over, using increasingly brutal methods. Soufan reported what he called “borderline torture” to his superiors in Washington. In protest of the abuse, former FBI Director Robert Mueller pulled Soufan out of the location. [continued…]

Editor’s Comment — As Dick Cheney pursues his campaign to avoid criminal prosecution, it’s natural that he would want to frame the issue of so-called “enhanced interrogations” in terms of necessity and national security. At the same time, for Cheney and Bush the use of torture fits very comfortably into their general approach to politics. These are men who have neither an aptitude in the art of persuasion nor skill in outwitting their opponents. The way you win is through dominance and when necessary, crushing your opponent. The idea that interrogation might involve building a rapport with a terrorist suspect is something that would simply seem objectionable.

Cheney’s role deepens
By Robert Windrem, The Daily Beast, May 13, 2009

At the end of April 2003, not long after the fall of Baghdad, U.S. forces captured an Iraqi who Bush White House officials suspected might provide information of a relationship between al Qaeda and Saddam Hussein’s regime. Muhammed Khudayr al-Dulaymi was the head of the M-14 section of Mukhabarat, one of Saddam’s secret police organizations. His responsibilities included chemical weapons and contacts with terrorist groups.

“To those who wanted or suspected a relationship, he would have been a guy who would know, so [White House officials] had particular interest,” Charles Duelfer, head of the Iraqi Survey Group and the man in charge of interrogations of Iraqi officials, told me. So much so that the officials, according to Duelfer, inquired how the interrogation was proceeding.

In his new book, Hide and Seek: The Search for Truth in Iraq, and in an interview with The Daily Beast, Duelfer says he heard from “some in Washington at very senior levels (not in the CIA),” who thought Khudayr’s interrogation had been “too gentle” and suggested another route, one that they believed has proven effective elsewhere. “They asked if enhanced measures, such as waterboarding, should be used,” Duelfer writes. “The executive authorities addressing those measures made clear that such techniques could legally be applied only to terrorism cases, and our debriefings were not as yet terrorism-related. The debriefings were just debriefings, even for this creature.” [continued…]