The meaning of the Tehran spring
By Pepe Escobar, Asia Times, June 16, 2009 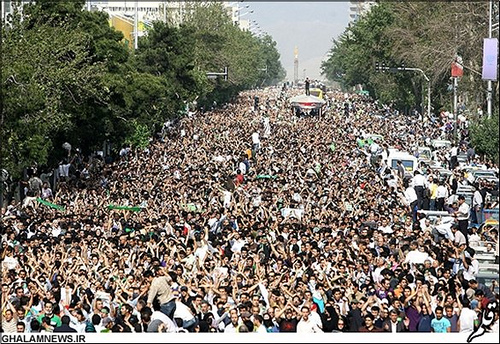 Today’s rally in Tehran in support of Mousavi

It is 1979 in Tehran all over again. From Saturday to Sunday, the deafening sound deep in the night across Tehran’s rooftops was a roaring, ubiquitous “Allah-u Akbar” (God is great). Then, in 1979, to hail the Islamic revolution; now, in 2009, to signify what appears to be the hijacking of the Islamic revolution. Then, the revolution was not televised; it was via (Ruhollah Khomeini) radio. Now, it is being broadcast all across the world.

Let’s cut to the chase: what Iranian presidential candidate Mir Hossein Mousavi qualified as “this dangerous charade” and Supreme Leader Ayatollah Ali Khamenei “the sweetness of the election”, or better yet, a “divine assessment”, has all the non-divine markings of intervention by the Iranian Republican Guards Corps (IRGC). This follows President Mahmud Ahmadinejad officially gaining 64% of the vote in defeating Mousavi in what in the days before Friday’s vote had widely been called as a very close race.

Scores of protesters equating Ahmadinejad with Augusto Pinochet in 1973’s Chile might not be that far off the mark. Call it the ultra-right wing, military dictatorship of the mullahtariat.

This is emerging as a no-holds-barred civil war at the very top of the Islamic Republic. The undisputed elite is now supposed to be embodied by the Ahmadinejad faction, the IRGC, the intelligence apparatus, the Ministry of the Interior, the Basij volunteer militias, and most of all the Supreme Leader himself. [continued…]