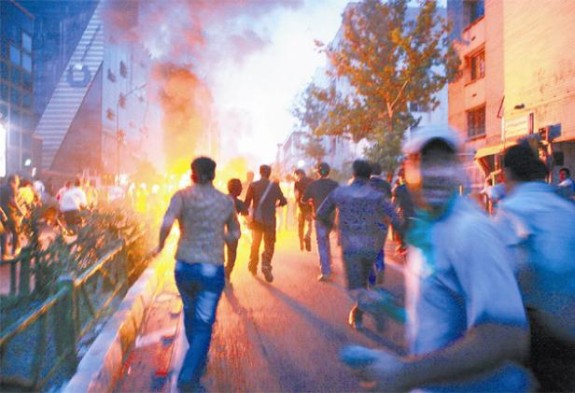 Defeated presidential candidate Mirhossein Mousavi urged supporters to stage protests or gather in mosques to mourn those killed after disputed elections that set off Iran’s worst unrest since the 1979 Islamic Revolution.

Hardline President Mahmoud Ahmadinejad’s victory against the reformist Mousavi sparked demonstrations and bloody street battles in Tehran which killed at least seven people on Monday while other protests flared up in cities across Iran.

“A number of our countrymen were wounded or martyred,” Mousavi said in a statement on his website posted on Wednesday.

“I ask the people to express their solidarity with the families … by coming together in mosques or taking part in peaceful demonstrations,” said Mousavi, adding that he would also take part in the day of mourning planned for Thursday. [continued…]

Editor’s Comment — By once again rallying his supporters both in defiance of the government and in the name of mourning those who have been killed, Mousavi is rekindling the spirit on the 1979 revolution. Through 1978, demonstrations following a 40-day mourning cycle — each time mourners gathered, more would be killed — became the engine of the revolution. Mousavi is not going to be constrained by the 40-day tradition, but he is tapping into mourning as perhaps the most potent and unifying sentiment among Shiites.

At this point, it appears that the rubicon has been crossed — Iran is in a revolutionary situation. For many analysts, this is something they appear to have a hard time grasping. After all, Mousavi, Rafsanjani, and Katami are mainstays of the regime. Their intentions have merely been to usher in reform or simply a reapportioning of power — not stir up another revolution.

But although this might not be a revolution in a traditional sense, since it follows no ideological blueprint and lacks a revolutionary leadership, if events continue along their current trajectory (which at this point bears every mark of being unstoppable) then the reformists will find themselves accidental revolutionaries.

As Joe Cirincione succinctly put it, when describing how in the space of three days he’s cast aside the realist perspective: “This is no longer Khamanei’s Iran.”

Each time a demonstration gets banned and the ban doesn’t hold, Iranians and the world witness the fact that the regime is no longer in control. Ironically, the thuggish behavior of the Basij, although it is widely regarded as demonstrating the ruthlessness of Iran’s leaders, is actually less extreme than we could expect in response to similar expressions of defiance elsewhere in the region. In Egypt or Syria, the demonstrations would have been crushed well before they had a chance to reach a critical mass.

Fear has gone in a land that has tasted freedom
By Robert Fisk, The Independent, June 17, 2009

The fate of Iran rested last night in a grubby north Tehran highway interchange called Vanak Square where – after days of violence – supporters of the official President Mahmoud Ahmadinejad at last confronted the screaming, angry Iranians who have decided that Mirhossein Mousavi should be the president of their country. Unbelievably – and I am a witness because I stood beside them – just 400 Iranian special forces police were keeping these two armies apart. There were stones and tear gas but for the first time in this epic crisis the cops promised to protect both sides.

“Please, please, keep the Basiji from us,” one middle-aged lady pleaded with a special forces officer in flak jacket and helmet as the Islamic Republic’s thug-like militia appeared in their camouflage trousers and purity-white shirts only a few metres away. The cop smiled at her. “With God’s help,” he said. Two other policemen were lifted shoulder-high. “Tashakor, tashakor,” – “thank you, thank you” – the crowd roared at them.

This was phenomenal. The armed special forces of the Islamic Republic, hitherto always allies of the Basiji, were prepared for once, it seemed, to protect all Iranians, not just Ahmadinejad’s henchmen. The precedent for this sudden neutrality is known to everyone – it was when the Shah’s army refused to fire on the millions of demonstrators demanding his overthrow in 1979. [continued…]

Supporters of Iranian President Mahmoud Ahmadinejad and his main rival in the disputed presidential election, Mir Hossein Mousavi, massed in competing rallies Tuesday as the country’s most senior Islamic cleric threw his weight behind opposition charges that Ahmadinejad’s re-election was rigged.

“No one in their right mind can believe” the official results from Friday’s contest, Grand Ayatollah Hossein Ali Montazeri said of the landslide victory claimed by Ahmadinejad. Montazeri accused the regime of handling Mousavi’s charges of fraud and the massive protests of his backers “in the worst way possible.”

“A government not respecting people’s vote has no religious or political legitimacy,” he declared in comments on his official Web site. “I ask the police and army personals (personnel) not to ‘sell their religion,’ and beware that receiving orders will not excuse them before God.” [continued…]

(I checked with a Farsi-speaking friend about the lyrics in this song — they have nothing to do with Mousavi or the election. Still, I like the spirit!)