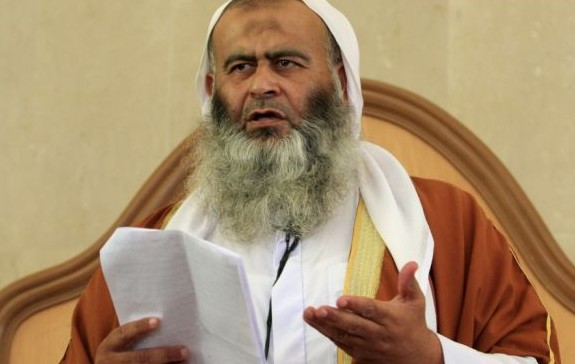 Hamas security said Saturday that the leader of an Al-Qaida-inspired group in the Gaza Strip has been killed during a fierce gun battle that began on Friday.

He said Moussa detonated an explosives vest he was wearing during the fighting.

“The so-called Moussa has committed suicide…killing a mediator who had been sent to him to persuade him and his followers to hand themselves over to the government,” Ghussein said.

He said the fighting ended later in the morning.

The fighting began Friday when Hamas forces surrounded a mosque in the southern Gaza town of Rafah where about 100 members of Jund Ansar Allah, or the Soldiers of the Companions of God, were holed up.

Flares lit up the sky overnight as Hamas machine gun fire and rocket propelled grenades slammed into the mosque. The militants inside the structure returned fire with automatic weapons and grenades of their own.

A Gaza medical official said at least 24 people, including six Hamas police officers and an 11-year-old girl, were killed in the violence that also wounded 150.

Jund Ansar Allah seek to enforce an even stricter version of Islamic law than that advocated by Hamas.

Israel Radio on Friday quoted Palestinian reports saying that Abu-Jibril Shimali, a commander of the Hamas armed wing, was killed in the clashes. The Iz a Din al-Kassam brigades that Shimali commanded orchestrated the kidnapping of Israel Defense Forces soldier Gilad Shalit.

The clashes came as Jund Ansar radicals defied the Hamas rulers of Gaza on Friday by declaring an “Islamic emirate” in the territory.

Though the “Warriors of God” rallied only a few hundred men for their event at a Gaza mosque, it was the latest challenge to Hamas’s nationalist brand of Palestinian Islam by groups espousing a pan-Arab militancy aligned with al-Qaida.

“We declare the birth of the Islamic Emirate,” declared Moussa, a heavily-bearded, middle-aged cleric in a red robe who was guarded by four black-clad, masked men with assault rifles. One wore what appeared to be an explosive suicide belt.

An audience of several hundred men filled the mosque with cheers and shouts. Al-Qaida uses the historical term “emirate” to mean clerical rule across the Islamic world.

Ismail Haniyeh, who heads Gaza’s Hamas government, denied in his Friday sermon that there were any non-Palestinian gunmen in the territory, as alleged by Israel which charges that veterans of wars in Iraq and Afghanistan have taken up residence.

“Such groups do not exist on the soil of the Gaza Strip…there are no fighters in Gaza except Gazan fighters,” he said.

Such “Zionist propaganda” from Israel was simply an attempt to turn the world against Hamas, he said.

His group announced its existence in Gaza two months ago, after three of its members were killed in a border raid on an Israeli base in which gunmen rode on horseback.

Outside the mosque on Friday, nearly 100 masked fighters of the group in Pakistani-style dress, wearing their hair long in a style believed to imitate the prophet Mohammad, carried automatic weapons and rocket-propelled grenade launchers.

Men of the Hamas armed wing and security forces took positions nearby. The group accuses Hamas of oppressing them, including making arrests and confiscating weapons.

Hamas is an Islamist group described by its leaders as a moderate movement and by independent analysts as giving priority to Palestinian nationalist goals over international religious aims typical of al-Qaida’s network. Observers detect strains within Hamas ranks between pragmatic and more radical factions.

Hamas refuses to renounce violence against Israel but has condemned Al-Qaida bombings in other countries. It has made little public attempt to impose fundamentalist law or strict dress codes, but it is encountering more frequent challenges from groups who want more traditionalist Islam in Gaza.

Human rights groups last month criticized an order by a Hamas-appointed judge that women lawyers cover their hair, and a campaign by its religious affairs ministry to encourage the public to follow Islamic instructions.

Moussa warned Hamas against implementing a decision to take over the mosque where he leads prayers for his followers: “If they approach the mosque they should know their days will be cut short,” the grey-whiskered cleric said.

Moussa said his group would not initiate attacks against Hamas but “whoever sheds our blood, his blood will be shed”.

He urged “everyone who has a weapon” to join the group and carry out decisions to be issued by the armed wing in coming weekly sermons. The group believes democracy is prohibited by Islam because it follows earthly law instead of God’s word.

“Who are you afraid of? America? Britain? France? The European Union? You should fear only God,” Moussa said in a warning to Hamas leaders seeking dialogue with the West.

Saeb Erekat, a senior peace negotiator with Israel and a member of the rival Fatah group in the West Bank, described the situation in Gaza as alarming.

“Gaza is going down the drain in chaos and lawlessness,” he told the Associated Press.

Jund Ansar Allah first came to public attention in June after it claimed responsibility for a failed attempt to attack Israel from Gaza on horseback.

Israel unilaterally ended its occupation of the Gaza Strip in 2005 and withdrew its forces. Islamist radicals began to surface in Gaza following the takeover of the Israeli-blockaded enclave by Hamas in 2007, when it routed the forces of the secular Fatah movement of Palestinian President Mahmoud Abbas.