Update — Turns out ISIS already published a report [PDF] on this and suggest an alternative location NW of Qum in addition to the one described below. They also add dates to the imagery, the Google Earth images appearing below having been taken on March 25, 2005.

In numerous dispatches, Iran’s newly-reported and until a few days ago undeclared nuclear facility, is described as being built “inside a mountain“. In an Obama adminstration background briefing it was described as being located in “a very heavily protected, very heavily disguised facility”. Reports have also said that it is located north east of the city of Qum.

Understanding what “inside a mountain” and “very heavily protected” actually mean is important. It could mean that the facility is effectively invulnerable to any form of military strike.

Facilities buried more than 1000ft away from the earth’s surface are “essentially invulnerable to nuclear attack” says the Union of Concerned Scientists.

If it turns out the the Qum facility (and perhaps others) are in fact so heavily protected that they cannot be destroyed through a conventional or even an unconventional military strike, then the military threat that supposedly remains placed on that proverbial table would not really be a strike that could cripple of destroy Iran’s purported nuclear weapons program. It would simply mean that the threat of war remains on the table.

If that’s the case, then during the past couple of years (and remember, this facility has apparently been under observation since 2006), all the veiled and unveiled threats of an Israeli attack on Iran’s nuclear facilities have probably been made for purely political purposes.

So where is this newly announced facility and how heavily protected is it?

The Daily Telegraph has published this image from Reuters with the caption: “Satellite photo of what is believed to be a uranium-enrichment facility near Qom.” 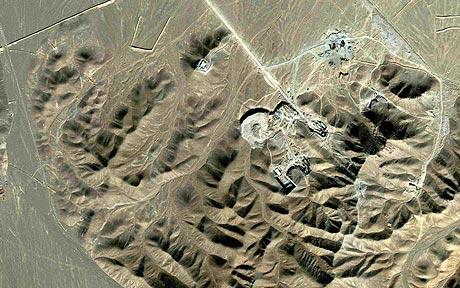 I’m a novice at using Google Earth but I’ve got a good topographic eye, so with “inside a mountain, north east of Qum (alt spelling Qom)” as my starting point, I thought I’d take a look.

Here are some mountains north east of Qum: 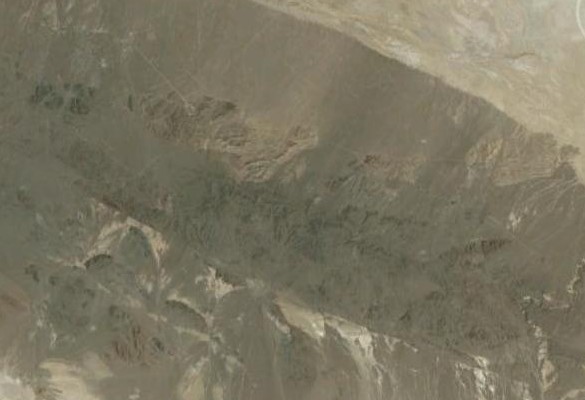 And what d’ya know? Here’s the location that appears in the Telegraph: 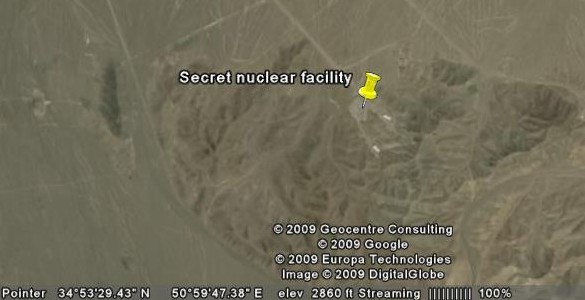 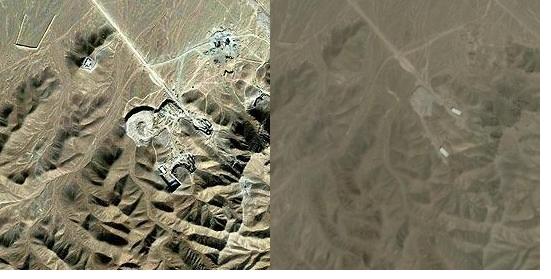 Of course, we don’t know for sure whether the Reuters-distributed image is actually a photograph of the facility in question, but let’s assume it is.

The Google Earth image is older and a comparison of the two reveals extensive earthworks that doubled in area during the (to me) unknown lapse between the two images. It looks like open-cast mining, suggesting that wherever in proximity to that these earthworks the facility might be buried, it probably isn’t under a 1000ft of granite.

The question remains (and it’s obviously one I can’t answer): is this facility invulnerable to a military attack?

(Update: The photos from ISIS identify two tunnel entrances to the east of the excavated area. 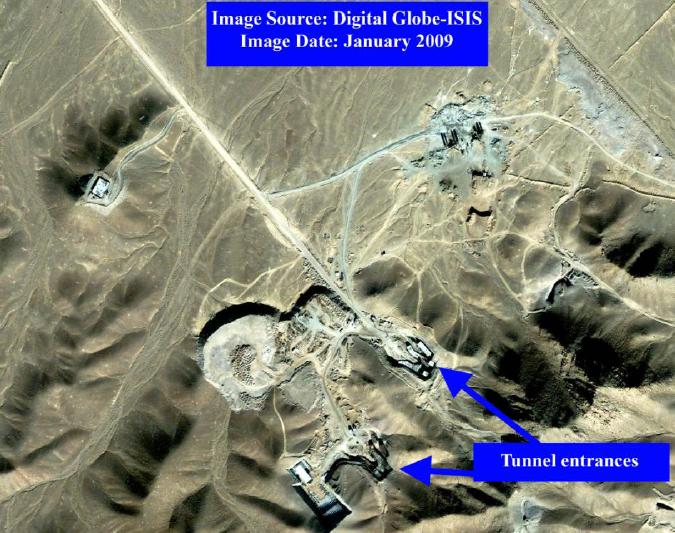 It seems quite possible that the tunnels do indeed extend deep enough into the mountains to provide strike invulnerability.) 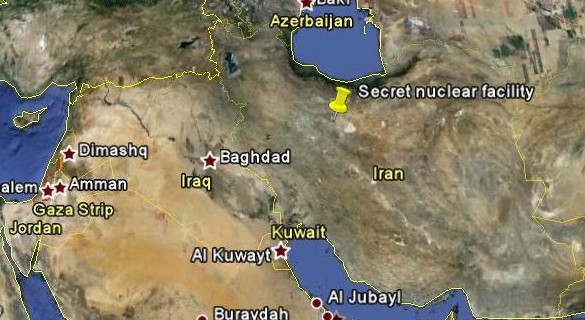 Second update: Upon further examination of the Google Earth information, I’m having second thoughts about the “buried in a mountain” description.

While the satellite image is suggestive of mountains, the range in elevation between the tunnel entrances and the highest surrounding ridges is little more than a hundred feet! These aren’t mountains: they are hillocks. Situated in a few undulations that protrude slightly from a vast salt basin area that is mostly at about 3,000ft in elevation, this “very heavily protected” facility might not in fact be quite as invulnerable as I suggested above.