On mountains and metaphors
By Paul Woodward, War in Context, September 27, 2009 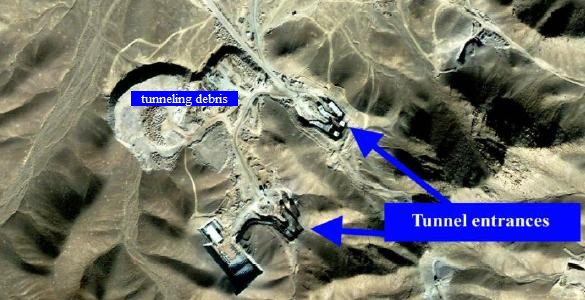 A few random thoughts and observations on the latest developments with Iran:

How big’s a mountain? It’s a clandestine nuclear facility under construction “inside a mountain“.

The only adjective that got left out was “deep,” yet knowing that detail might be the key to knowing exactly what “very heavily protected” means.

(This much we can already deduce about the extent of the tunneling: it has produced two very large adjoining flattened mounds of debris which are marked in the image above.)

Gary Sick seems to have been among the descriptively most precise in referring to “a small enrichment facility in an underground chamber on a Revolutionary Guards base.”

Inside an underground chamber it is; inside a mountain it is not — at least not unless one assumes a Lilliputian perspective and calls a 167ft tall hillock a mountain. That’s the difference in elevation between one of the tunnel entrances and the highest point along the ridge that the tunnel penetrates. (Use Google Earth to see specific elevations. For instance, the northern tunnel entrance is at 2,975ft. The adjacent ridge to the east is at 3,142ft.)

Not so fast with the sanctions. When the president of a country sharing a 1,458km border with Iran says sanctions against Iran won’t work, there’s reason to think that he isn’t simply making a prediction; he might be making a promise.

Iraq’s President Jalal Talabani gave this warning on Saturday and no doubt it was warmly received in Tehran. China and Russia might be crucial when it comes to imposing sanctions. Iraq might turn out to be key when it comes to enforcing or being unable to enforce them.

Pity the IAEA. There it is — the world’s indispensable nuclear monitoring agency — but does anyone care to share their intelligence so that IAEA inspectors can do their work? Only when the powers that be deem it useful.

Bombs away. Maybe this isn’t the smoking gun Israel was waiting for. Evidence of a clandestine program may confirm some of Israel’s dire warnings, but how many other similarly well-concealed and hard-to-destroy facilities might there be? All that an Israeli attack might actually accomplish would be to legitimize Iran’s withdrawal from the NPT and a rush towards weaponization.

The meaning of a mountain. If “inside a mountain” might be a topographical stretch, it’s an image that serves multiple purposes:
1. It’s too good an image for any journalist to risk undermining with a skeptical question. (“And just how big is that mountain?”)
2. It tells the world that the Iranians are dastardly, sneaky fellows whose evil plans can only be hidden by something as big as a mountain.
3. It says the Americans are so smart that they can find anything, however well hidden.
4. It highlights the possibly insurmountable challenge Israel would face in launching an air strike against a target much harder to destroy than a reactor under construction in Syria, or a weapons convoy on the move in Sudan.
5. It says that Obama isn’t a daydream believer sending his representatives into a negotiating trap; he’s back in his superhero mode out to save the world.

What’s it all about? Once you get past the theatrics it comes down to the pursuit of national interests — it’s not (or at least should not be) about putting Iran in a box.

Every party has distinct national interests, but fruitful negotiations will hinge on identifying where these interests overlap — not simply the overlapping interests of the US and its allies, but also those that are shared by Iran.

Stepping off the war path requires that everyone, including the Iranians, can see a way of winning.

1 thought on “Thoughts on Iran, mountains and winning without war”