The myth of “America”
By Dahr Jamail and Jason Coppola, Truthout, October 12, 2009

Catholic priest Bartolome de las Casas, in the multi-volume “History of the Indies” published in 1875, wrote, “… Slaves were the primary source of income for the Admiral (Columbus) with that income he intended to repay the money the Kings were spending in support of Spaniards on the Island. They provide profit and income to the Kings. (The Spaniards were driven by) insatiable greed … killing, terrorizing, afflicting, and torturing the native peoples … with the strangest and most varied new methods of cruelty.” 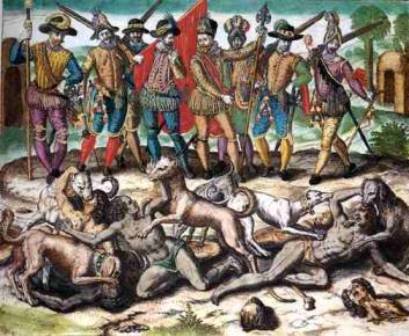 This systematic violence was aimed at preventing “Indians from daring to think of themselves as human beings. (The Spaniards) thought nothing of knifing Indians by tens and twenties and of cutting slices off them to test the sharpness of their blades…. My eyes have seen these acts so foreign to human nature, and now I tremble as I write.”

Father Fray Antonio de Montesino, a Dominican preacher, in December 1511 said this in a sermon that implicated Christopher Columbus and the colonists in the genocide of the native peoples:

“Tell me by what right of justice do you hold these Indians in such a cruel and horrible servitude? On what authority have you waged such detestable wars against these people who dealt quietly and peacefully on their own lands? Wars in which you have destroyed such an infinite number of them by homicides and slaughters never heard of before …”

In 1892, the National Council of Churches, the largest ecumenical body in the United States, is known to have exhorted Christians to refrain from celebrating the Columbus quincentennial, saying, “What represented newness of freedom, hope, and opportunity for some was the occasion for oppression, degradation and genocide for others.”