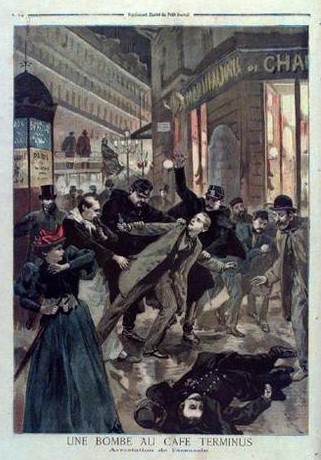 Bomb attacks are ripping through the world’s richest cities: explosions devastate Wall Street, the London Underground, a theatre in Barcelona, cafés in Paris, parades in Moscow. The police profile of a typical bomber warns: “He walks to his death with courage and no regrets.” There is panic, and governments launch programs of torture and deportation targeted at immigrant communities. Yet still the radicals wash defiantly across the world, killing as they go. They say they have “only one aim, one science: destruction.”

It sounds like a feverish novel about al-Qa’ida, set 30 years from now. But it has already happened. It is a story from our past. In the late 19th and early 20th century, anarchist bombers did all this. They were prepared to die for their beliefs. They lived in the same places as today’s Islamists — such as Whitechapel, in east London — and they struck the same targets, like lower Manhattan on a clear September morning.

In a new documentary — The Enemy Within, by Joe Bullman — young Islamists read the words of yesterday’s Jewish anarchists, from their writings and trial transcripts. While the societies they dream of building after the bombs are very different, their rage, their alienation, and their tactics are almost identical. The words fit so easily into their mouths that the Islamists say it is “creepy.” [continued…]