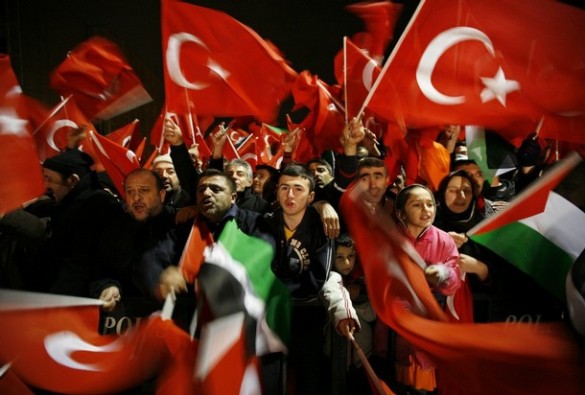 The historic reconciliation agreement signed Saturday between Turkey and Armenia constitutes further testament to the positive changes undergone by Turkey in recent year. A government with an Islamic orientation was able to impressively promote two highly sensitive issues for Turkish public opinion: Recognizing the cultural rights of the Kurdish minority and normalizing ties with Armenia.

The strong sense of Turkish nationalism previously prevented any compromise with the Kurds, for fear this will open the door for boosting their national demands and in turn for a renewed territorial disintegration by Turkey.

Tayyip Erdogan’s administration realized that it is precisely openness towards the Kurdish minority that will prompt a greater sense of belonging among them and weaken their aspiration to join other Kurdish areas, mostly in Iraq.

Erdogan faced a similar choice vis-à-vis Armenia: Perpetuating the frozen status-quo in the ties with Turkey’s neighbor would have boosted the global Armenian campaign for recognition of the massacre committed by the Turks as an organized and methodical genocide. Turkey would have been faced with all the possible implications of such recognition, especially if it would have also been backed by the US Congress.

Erdogan decided to preempt this blow, and while taking advantage of the weak Armenian economy (which suffered gravely as result of the closure of its borders with Turkey and Azerbaijan) managed to secure (with Swiss mediation) a reconciliation agreement that is difficult for both for the Turks and for the Armenians – yet postpones to an unknown future date the question of addressing the Armenian holocaust and entrusts future research on its scope in the hands of historians. [continued…]

Editor’s Comment — The writer notes “the fact that precisely at a time when Turkey reaches out to its past enemies, the Turkish administration is adopting an increasingly hostile policy vis-à-vis its former great ally – Israel” and he cites this as a justification for Turkey’s entry into the European Union being blocked.

It’s interesting that an Israeli should be advising the EU who it should or should not be willing to consider as a future member. Of course Israelis who are concerned about keeping Turkey out of the EU merely need to do their bit in helping foment anti-Muslim bigotry across Europe to ensure that the Turks won’t get a fair hearing.

While Eldad Beck clearly admires Erdogan’s diplomatic successes, he falls back on an old cliche in assuming that the Turkish leader is merely taking advantage of popular hostility towards Israel in order to advance his political goals. The assumption, as always, is that such hostility would either not exist or be of minor proportions were it not being fomented. Israel remains the perpetual victim of a bad press.

The real lesson that Israelis should be drawing from observing Turkey is to note how stark the difference is between a diplomatically and democratically empowered nation as it pursues a policy of regional engagement, versus the inevitable isolation that Israel now faces as a diplomatically crippled nation.

It turns out that having just one friend isn’t enough.

… we have to recognize the fact that should the trend of isolation continue, we shall have to pay a heavy price – first and foremost on the economic front.

More than ever before, Israel’s growth and employment situation hinge on exporting goods to the global market. In case of isolation, we will find it difficult to engage in international trade, attract foreign investments, and acquire the credit we need.

The isolation will also undermine us strategically, as it would encourage Hezbollah, Hamas, Syria and Iran to provoke us. This is based on the assumption that the Israeli government will shy away from ordering the IDF to operate against them in full force, for fear of another Goldstone Report and possibly even UN Security Council sanctions.

Moreover, the isolation also serves to increase Israel’s depends on the American Administration to a dangerous degree; this dependence is too heavy as it is. [continued…]

(Part One and Part Two)