Remember a mere five months ago when Hillary Clinton, with all the toughness she had displayed during her primary campaign, said bluntly: “[Obama] wants to see a stop to settlements — not some settlements, not outposts, not ‘natural growth’ exceptions”?

The whole administration — presumably with expert coaching by Rahm Emanuel — was sending a strong message to Israel: We know your games and we’re not going to take any crap.

Freezing settlements — this was the litmus test for Benjamin Netanyahu to demonstrate his ability to engage in the so-called peace process.

Within a few weeks the administration’s Iran policy was in disarray — in the aftermath of the disputed presidential election — and terrified of the charge that he was being tough on Israel while soft on Iran, Obama’s resolve withered. Netanyahu bounced back and he has been riding high ever since.

Back in June, Netanyahu was admonished for not doing his homework. Now he’s thrown it in the trash and gets praise for offering “restraint on the policy of settlements” — even as Israel demolishes Palestinian homes in East Jerusalem and Palestinian citizens of Israel protest against the ethnic cleansing of Jerusalem.

Meanwhile, as Netanyahu mocks the idea that Washington has the capacity or will to apply pressure on an Israeli government, J Street, “the political arm of the pro-Israel, pro-peace movement,” after launching itself onto the stage of mainstream American politics through its first national conference last week, must somehow strive to keep the two-state-solution dream alive.

The two-state solution is indeed the stuff of dreams — at least the dreams of Zionists who find the idea of equality between Jews and non-Jews abhorrent, or as J Street’s Jeremy Ben-Ami puts it, “a nightmare for the Jewish people.”

Perhaps Washington is not the best place for dream believers. Maybe it’s time for a glitzy Two-State Solution on Broadway.

Bibi and Hillary are already auditioning. 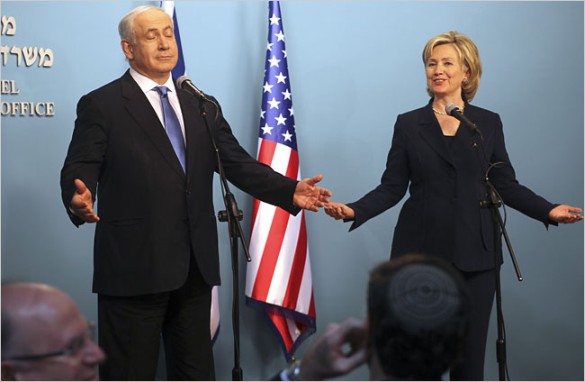 If you’re Palestinian, you know about checkpoints. There are over 600 checkpoints in the West Bank alone. They block, obstruct, frustrate and kill. Women die in childbirth at checkpoints, students are kept from attending school, parents from visiting their children, laborers from going to work. No one can swim in the sea. Israeli Jews are waved through checkpoints. They can swim in the sea. No problem. Jews travel freely on a complex system of Jewish-only roads and live on the Jewish side of the Separation Barriers along hundreds of miles of walls and fortified fences that keep Palestinians out. Palestinians live in an open air prison. Sometimes there is a moment of spring and the guards open the gates. But spring never lasts long. Blockades, nightly incursions, full-scale invasions, imprisonment, collective punishment, land theft, water theft, denial of education, health care, an economic future, frequent beatings and no freedom of movement is the daily bread of Palestinians. You can’t travel more than three miles without encountering a check point. Talk about stress.

J Street was a place where Jews talked to Jews about the Israeli-Palestinian conflict. Few Palestinians were present. Apparently they didn’t make it through the checkpoint. The narrative of J Street, like most Jewish narratives about the Israeli-Palestinian conflict, reflects the nature of the conflict as seen through a Jewish lens: Palestinians are physically absent. A Jew who seeks to express her activism in solidarity with Palestinians is in danger of loosing her ‘I love Israel’ card at a mainstream Jewish checkpoint. There were checkpoints at J Street. Some people were allowed in but not officially asked to participate, some were dis-invited, and some were not considered to be part of the conversation in the first place. [continued…]

A purely Jewish focus on a more-than-Jewish problem causes many leftist Jews to take a paternalistic view of Palestinians. Rather than equals whose inalienable rights form the crux of the case against Zionism, the Palestinians are the clay of Jewish humanism, waiting to be fully actualized by thoughtful and reflective Jewish hands.