Those ‘prone to violence’
By Paul Woodward, War in Context, November 13, 2009

sometimes wonder: was Charles Krauthammer always such an unhappy man? So often the sourness imprinted upon his face makes it difficult to know whether any distinction can be made between what he thinks and how apparently he feels.

Today he ever-so-predictably joins the ranks of those who declare that the media’s coverage of the Fort Hood massacre has been hamstrung by political correctness. No one in the liberal mainstream dare tell the real story and this vexes Krauthammer almost to the point of rage:

Have we totally lost our moral bearings? Nidal Hasan (allegedly) cold-bloodedly killed 13 innocent people. His business card had his name, his profession, his medical degrees and his occupational identity. U.S. Army? No. “SoA” — Soldier of Allah. In such cases, political correctness is not just an abomination. It’s a danger, clear and present.

Hmmm… So the United States faces a double and dire threat — from Islamic violent extremism and political correctness.

Perhaps political correctness reveals a suicidal tendency within our own culture?

OK, Krauthammer didn’t go quite that far, but I would hardly be surprised if he secretly thinks as much.

But wait a minute, Mr Former Psychiatrist. Aren’t you overlooking an important piece of evidence here?

The latest “proof” that Hasan was a terrorist — as Krauthammer underlines — is that he essentially identified himself as such on his business cards. This is reminiscent of the capture of Khalid Sheikh Mohammed when CIA agents found in his wallet, similar business cards bearing his job title: Head of Strategic Planning, Al Qaeda.

Well, maybe not. Whatever evidence gets presented in Mohammed’s upcoming trial in New York, I’m pretty sure will not include self-incriminating business cards. Indeed, when a “terrorist” prints a business card declaring that he is a Soldier of Allah, this may well suggest — as no doubt Hasan’s defense attorneys will be arguing, if he survives to face trial — that the person bearing such a card was deranged, however diabolical his intentions or actions might have been.

At this point, enough studies have been conducted to determine that mental illness is not a significant driving force behind terrorism. That is not to say that the ranks of al Qaeda are free of the deranged. Abu Zubaydah would be the most well-known case in point. As the FBI’s leading al Qaeda expert said, “This guy is insane, certifiable, split personality.”

Zubaydah’s mental health was regarded, however, as evidence that the organization would not have trusted him with any significant responsibility. From al Qaeda’s perspective, an operative’s susceptibility to becoming unhinged is a liability not an asset. 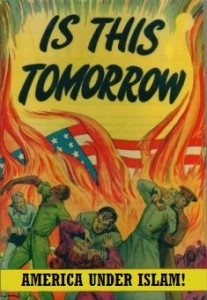 Krauthammer on the other hand — a trained expert in the workings of the human mind — displays little interest in whether Hasan might have been delusional. Why? His concern is with a much larger issue, that being: the threat posed to America by those who are “prone to violence.”

In his own nod to political correctness, the Washington Post columnist avoids spelling it out in black and white who he is referring to, yet his allusion is all too transparent: those who are prone to violence are Muslims.

Why have any interest in the possibly twisted mind of a US Army major if you believe that the well from which his violent thoughts were drawn was fed by a poisoned stream: the faith to which he subscribed?

Dr Krauthammer is astute enough to know that he would jeopardize his mainstream status if his warnings were peppered with phrases like “the threat from Islam” or “the Muslim problem”, yet it’s hard not wonder what his prescription might be for dealing with the problem he carefully avoids naming.

To bar Muslims from military service? To institute a military vetting program whose purpose is to root out suspicious Muslims?

Maybe he wants to cast the net much wider.

Maybe it’s time to translate the neo-McCarthyist spirit that Krauthammer represents into a formal process through which the American government can fearlessly challenge its greatest enemy.

“Are you or have you ever been a member of the Islamic faith, had friendships or relationships with Muslims or in any way expressed sympathy or offered support for Muslim activities?” a helpful senator — Joe Lieberman perhaps — might soon be asking.

1 thought on “Those ‘prone to violence’”