The brothers from Bradford are ready for Gaza
By Paul Woodward, War in Context, November 16, 2009 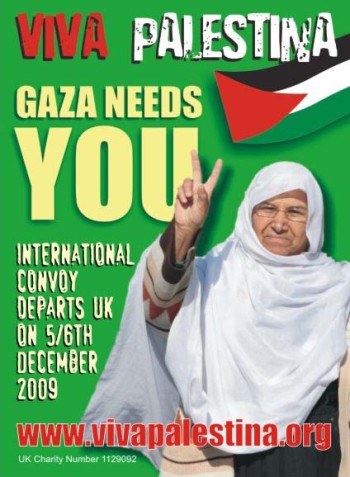 The first Viva Palestina convoy had just completed its arduous drive through Europe and across North Africa, traveling 5,000 miles to deliver humanitarian aid to the people of Gaza.

Before world leaders had convened in Egypt to make what were indeed empty promises — virtually none of the $4.5 billion of aid pledged in early March has subsequently reached any of its intended recipients — a bunch of ordinary working folk had gathered donations from their local communities, bought ambulances, a firetruck, other vehicles, medical equipment and urgently needed supplies and were well on their way to reaching Gaza.

At the time it looked like a terrific display of human spirit, even if it amounted to only a small fraction of the relief just one government could provide. Nine months later, after a second convoy reached Gaza in July and as a third “mega convoy” gears up for departure on December 5 [PDF], Viva Palestina has not only been an inspiring mobilization of people power — it has been of real practical effect at at time that the Blairs, Mitchells, Clintons, Milibands and Obamas of this world have shown themselves to be pathetic examples of all-words-and-no-actions.

Among the participants in the new convoy are a contingent from Bradford for whom I have a special affection.

With their keffiyehs, beards and traditional Pakistani dress, to many Americans some of these guys will look like jihadists from Waziristan, but to me they’re fellow Yorkshiremen.

As they are getting ready to go, they’ve put together a short video — after the intro titles, fast-forward to minute three (unless you have a particular interest in what ambulances look like) to hear the Bradford brothers speak for themselves:

For information on making donations to Viva Palestina go here.

Al Jazeera English recently aired a short documentary on the conditions facing the residents of the Gaza Strip. Munzer al-Dayyeh is a 40-year-old mechanic living in Gaza. And while the effects of war and ongoing siege may be good for his business, he can’t manage to secure medical treatment for his disabled children. An insight into an ordinary Gazan man struggling to make a living and to find a solution for his family in the difficulties of the Gaza Strip.