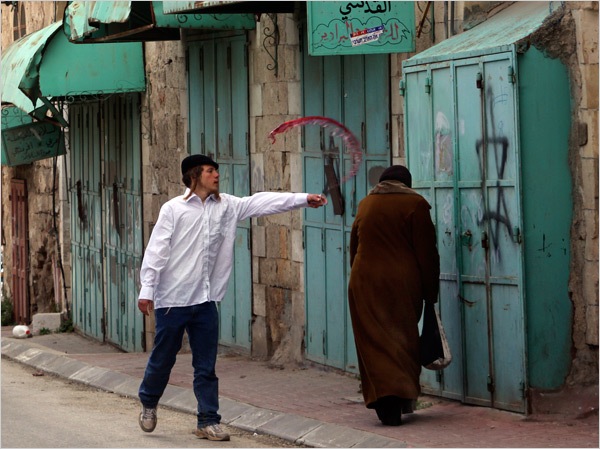 While South Africa was explicit about the goal of apartheid policies, Israel engages in discursive subterfuge so that the intent and effects of their policies must be seen on the ground to be fully comprehended. Shulamit Aloni, the former Israeli minister of education, relates an episode at a bypass road built for settlers in the West Bank:

On one occasion I witnessed such an encounter between a driver and a soldier who was taking down the details before confiscating the vehicle and sending its owner away. ‘Why?’ I asked the soldier. ‘It’s an order—this is a Jews-only road,’ he replied. I inquired as to where was the sign indicating this fact and instructing [other] drivers not to use it. His answer was nothing short of amazing. ‘It is his responsibility to know it, and besides, what do you want us to do, put up a sign here and let some anti-Semitic reporter or journalist take a photo so that can show the world apartheid exists here?’

Part of the appeal of the apartheid comparison is that apartheid is a recognized name for an ideology and practice of separation. There is no similar name for what Israel has done. Neither the pre-state Zionist movement nor the state of Israel has ever spelled out an official policy of discrimination against the Palestinians, and Israel did not institute discriminatory practices in one fell swoop. Instead, it has worked in a piecemeal fashion to constrain Palestinian rights and access to resources. In other words, separation in the Occupied Territories has been a process whose legal contours are harder to discern and whose name has yet to circulate abroad.

A corollary assumption underlying the comparison is that Israeli practices cannot be condemned as discriminatory in and of themselves. They cannot stand on their own, partly because they are difficult to understand unless they are seen up close. Most people understand that Zionism, as an ideology and a project, calls for Jewish communal security, and due to centuries of pogroms and the Holocaust, this project commands considerable sympathy. But many people do not understand that Zionism, as put into practice, calls for an exclusivist state that leads to policies characteristic of apartheid, as defined by the UN.

Zionism retains a significant body of supporters in the West, particularly among Jews and evangelical Christians, but also the public at large. For numerous historical, cultural and political reasons, the American public in particular “stands with Israel,” a fact demonstrated by poll after poll and not lost on successive US administrations. Israel and its backers work constantly to cement this support, in part by equating criticism of Israel, the “Jewish state,” with anti-Semitism. Thus, drawing attention to the parallels between Israel’s occupation and apartheid has been one way to turn the tables, framing the occupation (and not criticism of Israel) as inherently racist. But the introduction of race into the conversation heats it up to the boiling point: As the Jews of Europe suffered from persecution and genocidal racism, and Jews comprised a large percentage of the white Americans who put their bodies on the line for civil rights, equating the practices of Zionism with racism is, for many, inconceivable. Rational debate shuts down.

It may be time to develop a new language. “Apartheid” cannot thoroughly explain Zionist ideology or Israeli practices. It can simply offer broad points of comparison, a framing in an already powerful concept. Yet the Afrikaans term does have a Hebrew counterpart in the term hafrada, meaning separation from and putting distance between oneself and others, in this case, the Palestinians. In Hebrew, the wall is often referred to as the “hafrada barrier.” [continued…]

Editor’s Comment — I seriously doubt whether any effort to develop new language can ever work. We don’t need new terms — we need to bring about a shift in the way existing terms are used.

Apartheid was a system that Africaners believed in and legally institutionalized. The campaign against apartheid was an effort to delegitimize an idea that held legitimacy in the minds of its proponents. And that seems to be the key: people give names to the things they believe in. Efforts in “discursive subterfuge” are efforts to avoid naming that which needs to be denied.

The concept of hafrada has arisen (from what I understand) in an effort to legitimize a policy of separation, yet that policy carries with it the notion that this separation comes out of a security imperative rather than an ideological conviction. It amounts to saying: We don’t want separation but the Palestinians made us do it.

The implication is that Israelis are good Western pluralists who are not racists and who would happily co-exist with their neighbors if only their neighbors could forsake their violent tendencies.

Julie Peteet says: “Perhaps the Hebrew hafrada can one day become a rallying cry as powerful as “apartheid” was in its day.”

To my mind the much more likely candidate is Zionism.

Although this is a word that is a long way from completely losing mainstream legitimacy, it has over the decades acquired increasingly negative connotations. It is a word that seems to have entered a netherworld. Self-described Zionists tend to be right-wing. Liberal Zionists either refrain from unabashedly calling themselves Zionists or they strongly emphasize the “liberal” qualification. Yet Zionism, of whatever political stripe, has at its core the notion of Jewish sovereignty in a Jewish homeland.

What does that mean? The clearest expression that I have recently heard comes from Rabi Toba Spitzer, an American Jew who in a promotional video for J Street underlined this as one of Israel’s core attributes: “[Israel is] the one place in the world where Jews are in charge.”

Whatever Israel’s future — whether its international boundaries can be agreed upon and whether a Palestinian state can be created — the continuation of Israel’s existence as a Jewish state depends on this: that it remains a state where Jews are in charge.

This, it seems to me, reveals the unvarnished nature of Zionism and exposes Israel’s hollow claim to be democratic.

Democracy is government by the demos — the people — and it allows no distinction between the multitude of groups whose amalgamation constitutes “the people”.

Jewish democracy, built on the fantasy of “a land with no people for a people with no land”, has in its practice used “democracy” as a salve to its liberal conscience, yet in the conflict between its Jewish identity and its democratic identity, democracy has consistently lost.

Israel’s enemy within: A rising militancy from the Jewish settlements
By Matt McAllester, GlobalPost, November 19, 2009

The terrorist walked up the quiet alleyway, police say, and went down nine steps and found himself hidden from view in the stone vestibule outside the famous Holocaust survivor’s apartment.

More than a half century ago the Nazis hadn’t been able to kill Ze’ev Sternhell, who would live to become Israel’s foremost expert on fascism and a long-time peace activist. But the terrorist who was now on his door step, whom police allege was a fellow Israeli from the militant settlement movement, was determined to succeed in just that. He attached the bomb, hidden inside a plant, to the doorknob and left.

Sternhell was inside the apartment in West Jerusalem. It was Sept. 25, 2008 and he and his wife had returned from a vacation in Paris the previous day. The hallway leading to the front door was still clogged up with their bags. It was late, a few minutes after midnight, and just like he does every night, Sternhell went to close the metal gate at the entrance of the vestibule that is meant to keep unwelcome guests from breaking and entering. The obstruction in his hallway forced Sternhell to turn sideways, the right side of his body facing outside, as he opened the door to the apartment.

There was a huge noise and something pushed him back. He saw the flash of an explosive. His right leg and thigh stung with pain and began to bleed. He was rushed to hospital in an ambulance. Doctors told him later that if he had not been sideways to the blast, his abdomen would likely have been pierced by the bomb’s shrapnel. He could have died.

Police who came to the scene found leaflets scattered nearby. The fliers offered a reward of $300,000 to anyone who killed a member of Peace Now, Israel’s best known peace movement. “The State of Israel has become our enemy,” the fliers said. Police officers immediately went to guard the home of Peace Now’s most-prominent figure, general secretary Yariv Oppenheimer.

I interviewed Sternhell in his home this January. The police had made no arrests back then, but Sternhell was convinced that fellow Jews had tried to kill him. “This,” said the 73-year-old, whose mother and sister were killed by the Nazis when he was 7 years old, “was an act of pure Jewish terror.” [continued…]

Human rights groups are calling on the Israeli government to cancel instructions preventing ambulances from entering Palestinian neighborhoods in East Jerusalem without a police escort.

According Adalah, The Legal Center for Arab Minority Rights in Israel, Magen David Adom (MDA) ambulances “must wait in a Jewish neighborhood adjacent to the Palestinian neighborhood and may not enter it to transfer the injured or the sick person to the hospital until a police escort arrives, even in life threatening situations.”

In many cases, patients face long delays in receiving treatment, and must be transferred by their own family’s cars, risking complications or increased severity of illness, the rights advocates say.

In a news release on Thursday, Adalah said the procedures “violate the first rule in the work of emergency crews, which is to provide medical aid as soon as possible, and the state’s obligation to ensure the life and physical well-being of each person under its authority.” [continued…]

2 thoughts on “Israel: Apartheid and beyond”