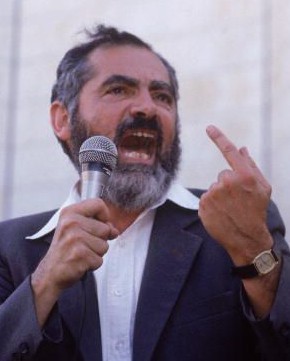 plan by right-wing legislators in Israel to commemorate the anniversary this month of the death of Meir Kahane, whose banned anti-Arab movement is classified as a terrorist organisation, risks further damaging the prospects for talks between Israel and the Palestinians, US officials have warned.

A move to stage the commemoration in Israel’s parliament, the Knesset, is being led by Michael Ben-Ari, who was elected this year and is the first self-declared former member of Kahane’s party, Kach, to become a legislator since the movement was banned 15 years ago.

The US Embassy, in Tel Aviv, has sent a series of e-mails to Reuven Rivlin, the parliamentary speaker, asking that he intervene to block the event.

According to US officials, pressure is being exerted on behalf of George Mitchell, the US president Barack Obama’s envoy to the region, who is concerned that it will add to his troubles as Israeli and Palestinian leaders clash over a possible move by the Palestinians to issue a unilateral declaration of statehood.

Some Israeli legislators have warned that Mr Ben-Ari and his supporters are gaining a stronger foothold in parliament, in an indication of the country’s increasing lurch rightwards.

“Ben-Ari and the advisers he has brought with him are unabashed representatives for Kach and Kahane’s ideas,” said Ahmed Tibi, an Arab legislator and the deputy speaker. “What we have is in effect a terrorist cell in the parliament.” [continued…]

Editor’s Comment — Beyond the fact that Rabbi Meir Kahane was bad for Israel’s international image and that he fomented hostility between Jews and Palestinians, Kahane no doubt antagonized moderate Zionists by unmasking the contradictions implicit in the notion of a Jewish democratic state.

The following videos contain a CBS 60 Minutes report on Kahane from 1984. (The second part of the report is followed by a song eulogizing Kahane. Whoever put this on YouTube is clearly a shameless Kahanist.)

Kahane was describing the “demographic threat” facing Israel well before that phrase and that concept was lent a veneer of political respectability by becoming the fact that, for Zionists, makes the realization of a two-state solution an imperative.

Interestingly, back in 1984, an American journalist — Mike Wallace — had no problem asserting on national television that Israel’s claim to be democratic would require accepting the possibility that Palestinians might at some point become the majority.

Wallace, in the setup for the interview clip says: “Kahane asks his Jewish opponents how they would react to an Arab majority in Israel?”

Rabbi Meir Kahane: In theory, do they [the Palestinians] have a right to be the majority? Yes or no? They [Kahane’s opponents] can’t answer that. They cannot answer that question.

Wallace: If Israel is a democratic state, then obviously they [the Palestinians] obviously do [have a right to be in the majority].

Kahane: Right. But if it’s a Zionist state then obviously they don’t.

Wallace: But you’re the one who finds it impossible to accept both Zionism and democracy in the same state.

Kahane: Anyone does, because Zionism — the very definition of it is: the creation of a Jewish state — and in fact, Israel is defined in its declaration of independence as the “Jewish” state. You think that that makes Arabs feel happy. You think that Arabs rush into the streets on Independence Day in Israel to celebrate their defeat.

I think that only liberals have such contempt for Arabs that they believe you can buy an Arab’s national pride by raising his living standards. Not by bread alone does an Arab live.

Because I respect the Arab, I want to throw him out.

Later in the 60 Minutes report, Kahane is shown outside city of Umm al-Fahm, the second largest Palestinian city within Israel, saying in reference to some of its residents who are protesting his presence: “I want to make it clear to those dogs that are standing there, there is no such thing as an Arab village in the state of Israel.”