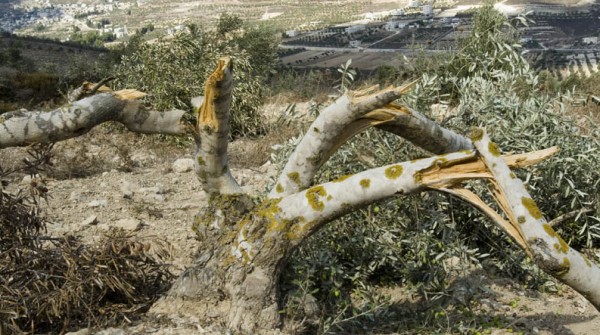 The old tractor sputtered up the hill, its engine seemingly about to expire, but its big wheels bumping across the rocky terrain. We stood in the back, swaying wildly, holding on for dear life. On the hilltop loomed the big antenna of the settlement of Yitzhar, whose houses lay on the other side of the hill. The very knowledge of their presence inspired dread. It was a glorious sunny day, the spectacular valley sprawling below. The houses of the Palestinian village of Burin lie in this valley, which lies between two hills: on one stands Yitzhar; on the other, Har Bracha, outside Nablus.

Burin is caught between a rock and hard place, between Har Bracha and Yitzhar. We have visited Burin often, most recently after settlers burned down some of its homes. Settlers once stole a horse from a villager, torched fields, demolished a home in the village and uprooted olive trees. We have frequently documented the uprooting of olive trees: Less than a month ago, in this space, we told the story of the beautiful vineyard belonging to the agriculture teacher Mohammed Abu Awad from the village of Mureir, whose 300 trees were felled by intruders – probably from the illegal outpost of Adei Ad – using buzz saws.

Here, clues left by the criminals suggest that they used handsaws and ripped out the crowns of the trees with their hands, one crown after another, one branch after another, rending and wounding the trees. In Mureir, the agriculture teacher wrapped the stumps in sacks, giving them the look of figures in shrouds. Here, in Burin, the stumps remain where they were hurled on the ground, stacks of dead wood, branches withering, until finally the farmer will use them as firewood to heat the village’s clay ovens, the tabuns.

But the feeling is the same, the affront is the same and so is the grief. In October, the farmer Abu Awad said about the ruins of his vineyard in Mureir: “What must you feel if you plant and tend and then it’s all cut down? What must I feel? If I had been there, I’d have told them, cut off my hands, but don’t cut down my trees – What did the tree do to them, for them to treat it like this?” (Haaretz Magazine, October 16)

And now the farmer Ibrahim Imran tells us in Burin: “These trees are like my children.” Hands or children, the grief of those who tend their olive groves is searing and deeply moving. The inability of the soldiers of the Israel Defense Forces and of the officers of the Israel Police to protect the groves of these farmers, to protect their property and their honor, is the inability of all of us.

We stood on the rear fender of the tractor as it clambered its way up the hill. Standing with us was Ruth Kedar, an activist from Machsom Watch, which monitors checkpoints, and Yesh Din (Volunteers for Human Rights). She has crisscrossed the territories in her private car for years, documenting wrongs and injustice. Her husband, retired colonel Paul Kedar, is also active in Yesh Din. It’s worth lingering over his riveting biography: Paul Kedar comes from a Revisionist family; his father was one of Ze’ev Jabotinsky’s secretaries. He himself was one of the founders of the Israel Air Force and later served as air attache in Paris during the period of the Sinai Campaign. He has been in the Mossad and served as consul general in New York, among other state posts. He was a friend of Moshe Dayan and Shimon Peres. He too now devotes his time to documenting the occupation and struggling against its abuses. The Kedars, now in their eighties, will soon receive the Emil Grunzweig Human Rights Award from the Association for Civil Rights in Israel, and deservedly so.

Above the noise of the tractor, one of the Palestinian farmers tells us that he heard that his neighbor, Rabbi Yitzhak Shapira, from Yitzhar, has permitted the killing of all non-Jews. Indeed, Shapira, head of the Od Yosef Hai yeshiva in Yitzhar (named for the biblical Joseph), recently published a book, “The King’s Torah,” in which he states that it is permissible to kill every gentile who constitutes a threat to the Jewish people, even if he is a child or an infant.

When Imran arrived to work his land early Thursday morning, he was appalled. It was, he says, “the height of frustration,” and adds: “After God, I rely only on my olive trees. These trees are no less than 70 years old. My great-great-grandfather planted them.”

Imran called everyone he could think of – the District Coordinations Offices, the International Red Cross, B’Tselem and Yesh Din – and also filed a complaint with the Israel Police at Ariel. Investigators came to the grove and took fingerprints, he says, but he has yet to receive confirmation of having submitted a report. Yesh Din is now handling his complaint.

An IDF jeep suddenly arrives to see what’s going on – just the kind of jeep that rarely shows up when the settlers go on a rampage.

A spokesman for the Shai (Samaria-Judea) District of the police stated in response: “On November 12, a resident of Burin complained that he noticed that 90 olive trees on his land had been chopped down. The damage was documented by the criminal investigations department at the site, and trackers scoured the area to find footprints. Testimonies were taken from two locals: the owner of the land and his worker. The police are conducting additional investigative activities, among them locating suspects and witnesses. The Samaria District police are also operating on the intelligence plane.”