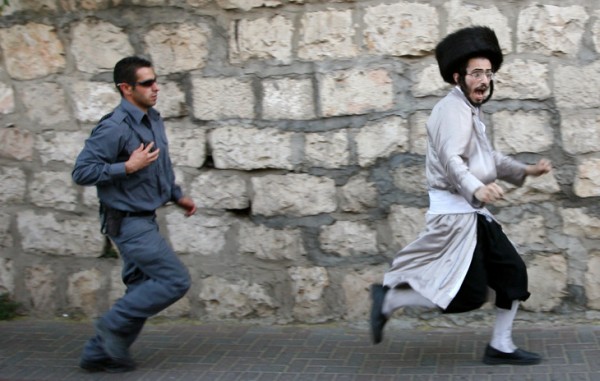 Here is a thought experiment. It is Sunday, and various employees of Intel’s R&D and consulting facility in Chantilly, VA, just outside of Washington, are working through the week-end. The facility is suddenly surrounded by several thousand evangelical Christians–mainly educated at Regent University, and led by the aged Pat Robertson–who demand that the company shut down the facility, so as not to violate the holy Sabbath. Windows are shattered by rock throwers. State police move in, but do not disband the mobs.

So Intel’s senior management go into a huddle. They authorize the local management team to meet with Robertson’s representatives, along with representatives from the Virginia governor’s office, now in the hands of rightist Republicans. At first Intel threatens to pull out of Virginia. But finally they approve a compromise agreement. The facility can stay open, the agreement states, but the shifts will be reduced. Also, on Sundays, only non-Christians can work there.

Imagine, in this fantasy, what the Intel board would face at the next shareholders’ meeting. Or imagine the employee emails the corporation’s global “Director of Diversity,” Rosalind Hudnell, would be fielding the next morning.

Well, if haven’t already heard, something quite like this just happened in Jerusalem.

A week ago Saturday, Intel’s facility on Har Ha’Hotzvim–a technology park in a belt of land near (but not at all in) the burgeoning ultraOrthodox neighborhood of Sanhedria–was surrounded and vandalized by acolytes of various Haredi rabbis, most notably, the leader of Eda, Rabbi Yitzhak Tuvia Weiss. Intel met with representatives of the Haredi groups, facilitated by Jerusalem Mayor Nir Barkat and Knesset Speaker Ruby Rivlin–both rightists tied to Haredi voters. The Sabbath shift, so the “compromise” stipulates, will be cut from 120 employees to 20. None of them will be Jews. (By the way, this absurd agreement may have satisfied most, but not Rabbi Weiss. His mobs were back yesterday demanding a complete shut down.) [continued…]

Editor’s Comment — The more exposed the conflict becomes between the forces of secularism and religious fundamentalism inside Israel, the more it would seem that Israel depends on durable external enemies as the indispensable means for forging national unity.

Bring an end to the Israeli-Arab conflict and Israel might well then rip itself apart.