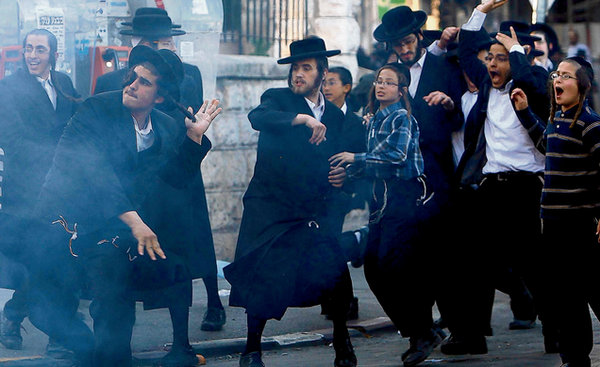 Father Samuel Aghoyan, a senior Armenian Orthodox cleric in Jerusalem’s Old City, says he’s been spat at by young haredi and national Orthodox Jews “about 15 to 20 times” in the past decade. The last time it happened, he said, was earlier this month. “I was walking back from the Church of the Holy Sepulchre and I saw this boy in a yarmulke and ritual fringes coming back from the Western Wall, and he spat at me two or three times.”

Wearing a dark-blue robe, sitting in St. James’s Church, the main Armenian church in the Old City, Aghoyan said, “Every single priest in this church has been spat on. It happens day and night.”

Father Athanasius, a Texas-born Franciscan monk who heads the Christian Information Center inside the Jaffa Gate, said he’s been spat at by haredi and national Orthodox Jews “about 15 times in the last six months” – not only in the Old City, but also on Rehov Agron near the Franciscan friary. “One time a bunch of kids spat at me, another time a little girl spat at me,” said the brown-robed monk near the Jaffa Gate.

“All 15 monks at our friary have been spat at,” he said. “Every [Christian cleric in the Old City] who’s been here for awhile, who dresses in robes in public, has a story to tell about being spat at. The more you get around, the more it happens.” [continued…]

Editor’s Comment — Larry Derfner underlines: “Every Christian cleric interviewed for this article stressed that they weren’t blaming Israeli Jewry as a whole for the spitting attacks; on the contrary, they said their general reception by Israeli Jews, both secular and religious, was one of welcome.”

Even so, the historical resonances of these particular expressions of Jewish bigotry, with their anti-Semitic European, segregated American and Apartheid South African counterparts, are inescapable:

A nun in her 60s who’s lived in an east Jerusalem convent for decades says she was spat at for the first time by a haredi man on Rehov Agron about 25 years ago. “As I was walking past, he spat on the ground right next to my shoes and he gave me a look of contempt,” said the black-robed nun, sitting inside the convent. “It took me a moment, but then I understood.”

But the spitting incidents weren’t the worst, she said – the worst was the time she was walking down Jaffa Road and a group of middle-aged haredi men coming her way pointed wordlessly to the curb, motioning her to move off the sidewalk to let them pass, which she did.

Derfner adds: “Christians in Israel are a small, weak community known for ‘turning the other cheek,’ so these Jewish xenophobes feel free to spit on them; they don’t spit on Muslims in the Old City because they’re afraid to, the clerics noted.”

The targets of such expressions of contempt are however not confined to members of the Christian clergy.

Anne Barker, a reporter for Australia’s ABC News, described an incident this summer in which she became a victim of ultra-Orthodox Jewish hatred while she covered what have become frequent demonstrations in Jerusalem by Jews intent on preserving the sanctity of the Shabbat which they see threatened by secularism.

They might be supremely religious, but their behaviour – to me – was far from charitable or benevolent.

I found myself herded against a brick wall as they kept on spitting – on my face, my hair, my clothes, my arms.

It was like rain, coming at me from all directions – hitting my recorder, my bag, my shoes, even my glasses.

Somewhere behind me – I didn’t see him – a man on a stairway either kicked me in the head or knocked something heavy against me.