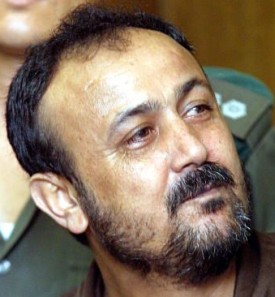 More than any other of the hundreds of Palestinians that are expected to be freed by Israel in return for Sgt. Gilad Shalit after three years of captivity in Gaza, the possibility of a Barghouti release carries political repercussions beyond the actual swap.

A proponent of the militarization of the Palestinian uprising that broke out in late 2000, Barghouti was convicted and sentenced to life in prison in 2004 on five counts of murder, including a shooting attack on a Tel Aviv restaurant.

But Barghouti also supports a two-state compromise with Israel and is a Hebrew-speaking, charismatic warrior-statesman with public opinion ratings among Palestinians that rival Palestinian Authority President Mahmoud Abbas and Hamas leader Ismail Haniyeh. Some say Barghouti could succeed Mr. Abbas, unify the Palestinians and provide Israel with the powerful partner it has lacked since the death of Yasser Arafat in 2004. [continued…]