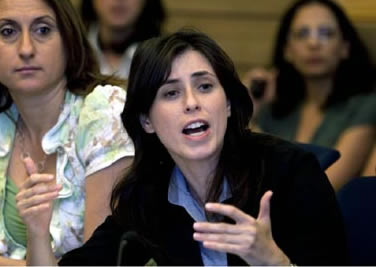 nesset Member Tzipi Hotovely, one of the leading dissenting voices in the Likud faction opposing the policy adopted by Prime Minister Benjamin Netanyahu, said Sunday that the territories should be annexed to Israel.

“Israeli law should be applied on the Judea and Samaria region,” Hotovely said during a conference in the Interdisciplinary Center in Herzliya and stated she did not rule out granting citizenship to Palestinians.

The MK explained that “Judea and Samaria are a part of the land of Israel,” and blamed the Palestinians for the failure of the political process. “We strongly wish to get a divorce, but the other side doesn’t want to separate.”

Hotovely told Ynet later in the evening, “It’s unthinkable that Jews in Judea and Samaria would live under occupation and under a military regime. The distorted policy, which states that every construction permit must be approved by the defense minister harms the most basic rights.

“It’s time to lift the question mark over Judea and Samaria and view the people living there as citizens with an equal status. Thinking ahead, strategically, we should consider granting gradual citizenship to Palestinians based on loyalty tests.” [continued…]

Editor’s Comment — Tzipi Hotovely, at 31 the youngest member of the Knesset, is younger than the occupation. Small wonder that she regards Israel’s control of the West Bank as irreversible. Her proposal to consider granting Palestinians citizenship if they pass a “loyalty test” obviously bears no relationship to the one-state solution that many anti-Zionists favor. Indeed, the Jewish claim to Greater Israel she is expressing has embedded in it a hubris that goes beyond that of the average Zionist — she seems to be implying that Jews could still exercise control over a Jewish state even if they were in a minority. Old hands in the conflict will no doubt dismiss her views as naive, but I have to wonder whether or not she is simply saying what a majority of her generation of Jewish Israelis already think.

Israel’s campaign against Palestinian nonviolent grassroots activists is continuing. The latest leader to be arrested is Jamal Juma’. Juma’ has been the coordinator of the Palestinian Grassroots Anti-Apartheid Wall Campaign since 2002. His arrests follows those of Mohammad Othman, who had been promoting BDS in Europe, and Abdallah Abu Rahmah a leader of the weekly nonviolent protests against the wall in Bil’in. [continued…]