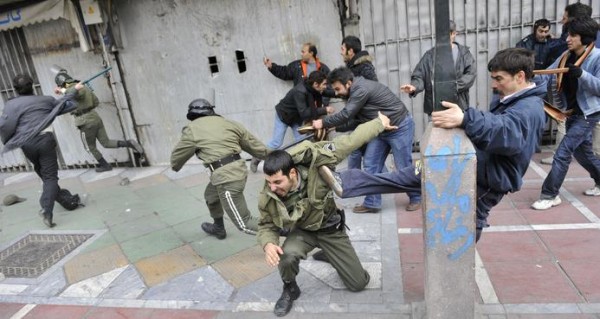 Much has been written about the fact that Iran’s democratic movement today combines the three characteristics of a velvet revolution—nonviolent, nonutopian and populist in nature—with the nimble organizational skills and communication opportunities afforded by the Web. Less discussed has been the significance of the youthfulness and Internet-savvy nature of the Iranian population.

Seventy percent of Iranians are under the age of 30. And in a population of 75 million, 22 million are Internet users. In spite of the nominal leadership of reformists like Medhi Karroubi, Mir Hossein Mousavi and Mohammad Khatami, the real leaders of the movement have been the thousands of groups and individuals who work autonomously, and whose structure replicates the Internet.

Until now, this lack of structure has given the movement its power. But the democratic movement has reached its own hour of reckoning.

As Supreme Leader Ayatollah Ali Khamenei and his cohorts come nearer to a crisis, as rifts within the regime deepen in coming weeks, as the regime ratchets up its ruthlessness against the democrats, and as the world, with anxious eyes on the nuclear issue, carefully watches the domestic situation in Iran, the democratic movement must develop a more coherent plan of action and a more disciplined leadership. And the world, particularly the West, must also let the regime know that it will not stand by idly as the people of Iran are brutalized by the regime.

To many in the outside world, the regime’s brashness—its willingness to murder peaceful demonstrators in broad daylight and its adventurism in the nuclear arena—have been shocking. But to the people of Iran, who have long suffered the consequences of the regime’s political despotism, its ideological sclerosis, and its economic incompetence and corruption, recent events are only egregious manifestations of what they have endured for three decades. It is the slow, sinister grind of this structural violence that has now turned nearly every strata of Iranian society—save those who owe their fortunes to the status quo—into the de facto foe of the regime. [continued…]

Editor’s Comment — Just as much as the power of the state is invested in its security apparatus, it equally resides within the perceptions of a population which believes in the state’s power.

Physical power functions above all to sustain an illusion of power.

When unarmed civilians start chasing the police, the veil has been lifted.

When Khamenei hears the chant “death to the dictator” now ringing out, he knows this is no figure of speech and no empty threat.

The start of an Iranian intifada
By Meir Javedanfar, Tehran Bureau, December 28, 2009

Judging from the events of Ashura, however, the protests now seem to carry the potential to turn into a full-scale civil disobedience campaign, not unlike the first intifada the Palestinians initiated against Israel in 1987. Such an uprising will mean continuous periods of strikes and civil disobedience, as well as more confrontations between members of the public and security forces.

The main factor contributing to the new status quo is the unrelenting policies of the Supreme Leader, which have pitted his philosophy of the Islamic Republic against longstanding Islamic institutions.

This is a battle that Khamenei will find extremely difficult to win. In fact, if developments continue in their current form, they can result in significant changes to the structure of his regime, or more drastically, lead to its total demise.

His decision to allow the Basij to mount an attack on mourners at Ayatollah Montazeri’s funeral was one factor leading to the spread of opposition in rural areas, faster and more efficiently than any campaign the reformist camp could have orchestrated. Yes, members of the opposition tried to take advantage of the mayhem, but also many genuine mourners had come to pay homage to a Grand Ayatollah. To Ayatollah Khamenei’s forces, they were all the same. To allow attacks against the residents of a holy city where the seeds of the 1979 revolution were planted was not just dead wrong from a religious perspective, it was politically counterproductive as well. [continued…]

Iranian security forces stormed opposition offices in a series of raids Monday and rounded up at least a dozen prominent dissidents in a new crackdown on the country’s reformist movement, opposition Web sites and activists reported.

The arrests came a day after violent clashes between anti-government demonstrators and security forces coinciding with Ashura, the peak of an intense mourning period in Shiite Islam. At least eight people were killed in the clashes, state television reported. Opposition sources said the death toll was higher.

Among those reported arrested were Ali Reza Beheshti, a top aide to political opposition leader Mir Hossein Mousavi; Emadeddin Baghi, a human rights activist; and Ibrahim Yazdi, a 78-year-old former foreign minister who was in Iran’s first government after the 1979 Islamic revolution. [continued…]

Iran regime fears its opponent in waiting
By Michael Theodoulou, The National, December 28, 2009

Hossein Ali Montazeri’s death has left the Iranian regime stunned and reeling. The grand ayatollah’s passing at the beginning of the religious mourning month of Moharram galvanised an opposition movement that the regime, despite its repressive muscle, has failed to crush six months after the disputed re-election of the president Mahmoud Ahmadinejad.

For those wondering who could possibly fill Montazeri’s shoes as the regime’s most potent clerical scourge, the authorities betrayed their fears by providing a swift, if unofficial, answer that few would dispute.

After Montazeri’s tumultuous funeral in Qom last Monday, hundreds of plainclothes militiamen ransacked the premises of his close friend, the Grand Ayatollah Yousef Sanei. There was no surer sign that the regime believes he will become the opposition’s new spiritual leader: like Montazeri, the 72-year-old cleric is an outspoken champion of democratic values in an Islamic system. [continued…]

With Iran’s crackdown on protesters intensifying, the Obama administration and allied governments are rethinking their approach to planned sanctions in hopes of focusing the punishments more tightly on the Iranian leadership, U.S. officials say.

U.S. and allied officials have been in discussions for months about how to impose economic penalties on Tehran to discourage it from continuing with a uranium enrichment program that the West believes is aimed at developing a nuclear bomb.

But as the Iranian government’s crackdown has taken a growing toll on the opposition movement, officials are increasingly concerned that broad sanctions harming ordinary citizens would appear harsh to the outside world and would risk alienating parts of the population with which the West seeks to establish common cause. [continued…]

2 thoughts on “The tipping point in Iran”