YEAR IN REVIEW: Obama’s America is not delivering the goods
By Gideon Levy, Haaretz, August 14, 2009 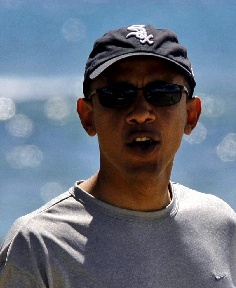 ith great sorrow and deep consternation, we hereby declare the death of the latest hope. Perhaps rumors of its death are greatly exaggerated, to paraphrase the famous quote by Mark Twain, but the fears are being validated day after day. Barack Obama’s America is not delivering the goods. Sharing a glass of beer with a racist cop and a pat on the back of Hugo Chavez are not what we hoped for; wholesale negotiations on freezing settlement construction are also not what we expected. Just over six months after the most promising president of all began his term, perhaps hope has a last breath left, but it is on its deathbed.

He came into office amid much hoopla. The Cairo speech ignited half the globe. Making settlements the top priority gave rise to the hope that, finally, a statesman is sitting in the White House who understands that the root of all evil is the occupation, and that the root of the occupation’s evil is the settlements. From Cairo, it seemed possible to take off. The sky was the limit.

Then the administration fell into the trap set by Israel and is showing no signs of recovery.

A settlement freeze, something that should have been understood by a prime minister who speaks with such bluster about two states – a peripheral matter that Israel committed to in the road map – has suddenly turned into a central issue. Special envoy George Mitchell is wasting his time and prestige with petty haggling. A half-year freeze or a full year? What about the 2,500 apartment units already under construction? And what about natural growth? And kindergartens?

Perhaps they will reach a compromise and agree on nine months, not including natural growth though allowing completion of apartments already under construction. A grand accomplishment.

Jerusalem has imposed its will on Washington. Once again we are at the starting point – dealing with trifles from which it is impossible to make the big leap over the great divide.

We expected more from Obama. Menachem Begin promised less, and he made peace within the same amount of time after he took office. When the main issue is dismantling the settlements, the pulsating momentum that came with Obama is petering out. Instead, we are paddling in shallow water. Mitchell Schmitchel. What’s in it for peace? Prime Minister Benjamin Netanyahu will once again meet him in London at the end of the month. A “magic formula” for a settlement freeze may be found there, but the momentum is gone.

Not in Israel, though. Here people quickly sensed that there is nothing to fear from Obama, and the fetters were taken off. Defense Minister Ehud Barak was quick to declare that there is no Palestinian partner, even after the Fatah conference elected the most moderate leadership that has ever been assembled in Palestine. Afterward, in a blatant act of provocation, he brought a Torah scroll into the heart of the Muslim Quarter in the Old City of Jerusalem, in full view of television cameras, just so America can see who’s boss around here.

Deputy Prime Minister Eli Yishai and Knesset Speaker Reuven Rivlin, another two politicians who smell American weakness, were quick to declare during a visit to Ma’aleh Adumim that Israel will not freeze any construction. To hell with Obama. The settlers continue to move into more homes in East Jerusalem, Netanyahu is silent and Israelis sense that the “danger” has passed. Israel is once again permitted to do as it pleases. The landlord has once again gone insane. Except that the landlord has gone insane because the real landlord is showing signs of weakness, signs of folding, signs of losing interest in events in the region that most endangers world peace.

Nothing remains from the speeches in Cairo and Bar-Ilan University. Obama is silent, and Yishai speaks. Even “Israel’s friends” in Washington, friends of the occupation, are once again rearing their heads.

One source familiar with Obama’s inner circle likened him this week to a man who inflates a number of balloons every day in the hope that one of them will rise. He will reach his goal. The source compared him to Shimon Peres, an analogy that should insult Obama. The trial balloons the U.S. president sends our way have yet to take off. One can, of course, wait for the next balloon, the Obama peace plan, but time is running out. And Israel is not sitting idly by.

The minute Jerusalem detected a lack of American determination, it returned to its evil ways and excuses. “There is no partner,” “Abu Mazen is weak,” “Hamas is strong.” And there are demands to recognize a Jewish state and for the right to fly over Saudi Arabia – anything in order to do nothing.

An America that will not pressure Israel is an America that will not bring peace. True, one cannot expect the U.S. president to want to make peace more than the Palestinians and Israelis, but he is the world’s responsible adult, its great hope. Those of us who are here, Mr. President, are sinking in the wretched mud, in “injury time.”

Editor’s Comment — When an 11 year-old gets the privilege of going to The White House to interview the president and the kid respectfully observes, “I notice as president you get bullied a lot,” it’s time to sit up straight.

Obama’s lack of backbone is apparent to a child and his method for handling getting bullied — “if I’m doing a good job, I’m doing my best, and I’m trying to always help people, then that keeps me going” — might make him feel better but it does little to push back those who are emboldened by his weakness.

Is Obama capable of imposing his will? After six months we should know the answer to that question. The fact that we don’t is a problem.

1 thought on “YEAR IN REVIEW: Obama is not delivering the goods”