One year has passed since the savage Israeli attack on the Gaza Strip, but for the people there time might as well have stood still.

Since Palestinians in Gaza buried their loved ones – more than 1,400 people, almost 400 of them children – there has been little healing and virtually no reconstruction.

According to international aid agencies, only 41 trucks of building supplies have been allowed into Gaza during the year.

Promises of billions made at a donors’ conference in Egypt last March attended by luminaries of the so-called “international community” and the Middle East peace process industry are unfulfilled, and the Israeli siege, supported by the US, the European Union, Arab states, and tacitly by the Palestinian Authority (PA) in Ramallah, continues. [continued…]

Editor’s Comment — Ali Abunimah, who has just left Cairo after attending the thwarted Gaza Freedom March, adds on his blog:

To talk about the siege of Gaza in the abstract is one thing, but to actually come to Egypt and find that Gaza is harder to visit than a prison is like a bucket of cold water. The Egyptian government may be efficient at few things, but it is highly efficient at maintaining the siege. Buses hired to take all the marchers to Gaza were prevented from showing up. Those who tried to get to Gaza under their own steam were turned back or detained at their hotel in Al Arish. It was very very frustrating. But whatever frustration we felt is one millionth of the frustration of the besieged Palestinian people in Gaza. So perhaps in some way it is better then that we did not get in, because Egypt gave us a small taste of what it serves every day to people in Gaza — and a small taste of what Egyptians face when they challenge their government’s policies.

Report from Gaza: One student’s question to the world – ‘Why the Palestinians? Why are we the only ones suffering?’
By Alex Cane, Mondoweiss, January 1, 2010 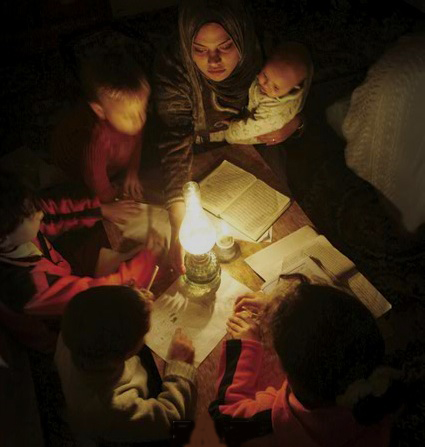 he question was like an electric shock to the six or so Palestine solidarity activists, including myself, as we were standing inside a classroom at a school in Gaza City.

“Why the Palestinians? Why are we the only ones suffering?” asked a Palestinian girl who was probably about nine or ten-years-old. And then the enormity of what the people of Gaza go through every day hit me.

Most of us were Americans and one was Canadian, and we were delivering some of the $17,000 in school supplies that Jessica Campbell and Julia Hurley, two members of the Gaza Freedom March student delegation, had brought and raised on their own. [continued…]

…there is perhaps no better time than this to review Israel’s 10 Worst Mistakes of the Last 10 Years:

1. The Siege of Gaza – The stated goal of the siege was to undermine Hamas and to goad Gazans into rejecting Hamas rule. The effect of the siege has been to focus and intensify Palestinian anger against Israel, increase Gazans’ dependency on Hamas social welfare arms, enrich Hamas coffers through tunnel taxation and foreign donations, and sap Palestinian support for Fatah, which, through its back-channel encouragement for the siege, is seen as a betrayer and a boot-licker in the eyes of many Palestinians.

2. The Siege of Gaza – The blockade was ostensibly a means to stem the influx of weaponry into Gaza. In practice, with shipments the size of automobiles flowing through the tunnels, the Hamas arsenal has grown ever more sophisticated, now believed to include Iranian-manufactured rockets capable of striking Tel Aviv and Ben-Gurion Airport from the Strip.

3. The Siege of Gaza – In the eyes of the world community, the overwhelming collective punishment – and the relative silence of Israelis in response – has gutted Israeli claims to the moral high ground. It has undercut sympathy for Israelis living within Qassam range. It has kept open the moral wounds of the Gaza War, cramping rebuilding efforts, enshrining universal unemployment, and ensuring agonizing homelessness as the coastal winter gathers full force. Israeli officials have quietly take steps of astounding insensitivity, arbitrarily barring such goods as school supplies.

5. The Siege of Gaza – The siege works to the detriment of U.S. support for Israel. In February, Secretary of State Hillary Clinton signaled anger at Israel over obstacles to humanitarian aid entering the strip. The message came soon after Senate Foreign Relations Committee Chairman John Kerry, visiting Gaza, learned that Israel had blocked shipments of pasta, ruling it off the list of permitted humanitarian aid items.

6. The Siege of Gaza – The fact that the siege has failed so completely in achieving its stated aims, reinforces the impression that its real purpose is punitive.

7. The Siege of Gaza – The siege places Israeli officials in jeopardy of being charged with violating the Fourth Geneva Convention and other international codes, as outlined in detail in the Goldstone Report. Referring to the siege, paragraph 1335 of the report states that: “From the facts available to it, the Mission is of the view that some of the actions of the Government of Israel might justify a competent court finding that crimes against humanity have been committed.”

8. The Siege of Gaza – With the siege under the direct aegis of Defense Minister Ehud Barak and his deputy, Matan Vilnai, the moral failings of the siege could prove the coup de grace to an already foundering Labor Party.

9. The Siege of Gaza – The siege threatens to destabilize the rule of Hosni Mubarak in Egypt, posing a potential threat to Israeli-Egyptian peace and Israeli security.

10. The Siege of Gaza – The siege corrupts the moral values of all Israelis, who, whether or not they are aware of what is being done to the people of Gaza, bear ultimate responsibility for all acts being carried out in their name. [continued…]

A year ago: Yonatan Schapira, a former Captain in the Israeli Air Force, speaks out on Israel’s war crimes
BBC News, January 6, 2009