Rawabi, and the American mission to civilize the West Bank
By Ahmed Moor, Mondoweiss, January 14, 2010 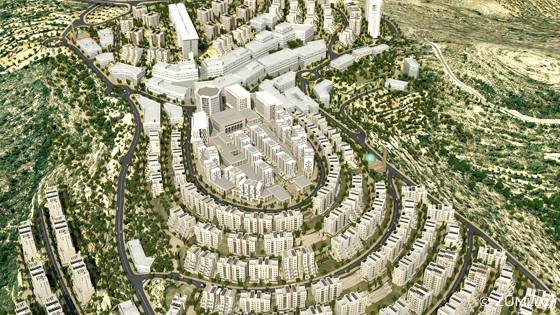 The Palestinian Authority, in coordination with the American government, is building a new settlement in the West Bank. This one is intended to provide 40,000 “Palestinians with homes in an American-style development.” The Huffington Post carries the whole story.

When I first heard about the Rawabi plan I was repulsed. It took some time for me to distill exactly what made me so uncomfortable. It wasn’t the Pavlovian conditioning; direct exposure to the Jewish settler colonies in the West Bank and Gaza has created a psychological association between objectively neutral architectural features – red-tiled roofs, trimmed hedges, cul-de-sacs – and racism and apartheid for me. It wasn’t that though; Rawabi seemed more profoundly wrong.

Rawabi is a painful outgrowth of the continued obliteration of Palestine. Here is something so clearly alien, something so obviously conceived in an alien mind, masquerading as Palestinian. Some State Department bureaucrat was saying to me, “We are destroying you and your culture to recreate you in our image.” Palestinian cities and towns, which grow organically – really, an amalgamation of family homes and municipal buildings – are now qualitatively inferior. The Palestinian village is old, antiquated, disorganized, dysfunctional, anarchical, loud and dirty. By contrast, Rawabi is new, organized, efficient, beautiful, clean, ordered and ‘American.’ Rawabi is the tangible materialization of the American mission civilisatrice in the West Bank, not to mention the project to alienate Palestinians from one another. [continued…]