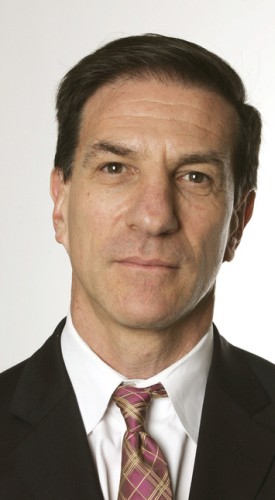 Toward the end of Ethan Bronner’s appearance at Vassar last night, a woman in the aisle melted down yelling at him. “What I’m hearing from you is only one side. Your son is in the IDF. You are Jewish… The way you talk is totally pro-Israel.” Then Fanny Prizant of Woodstock demanded, What is it about the New York Times? Why don’t they have someone else to at least put across the other side of the story?

Prizant was quite upset, and I found myself nodding in agreement. It had been a bizarre evening. It was like a lecture in a Hitchcock film, the setting a gaunt Edwardian-era hall at an upstate NY college, and only a few people in the room are in on the story and the man on the stage is clueless. Prizant’s was the third or fourth hostile question. I wondered why Bronner went through with the lecture to begin with. He must be a little masochistic, or he has a strong sense of journalistic duty. That is how he came off, as a dutiful New York Timesman, a little hectic, with little sense of the new American scene. When the story of his son being in the Israeli army broke, I said it was going to dog him and the Times, and you can see that that is happening.

The problem isn’t the son. It’s Bronner’s degree of identification with Israel. I kept looking at my watch waiting for him to say One Palestinian Name. Finally it came at about minute 45: university president Sari Nusseibeh. I’m pretty sure it was the first mention of any Palestinian he knows. The world according to Bronner is a Jewish one. There was the friend who invited him to an orthodox Westchester congregation. His writer friend in Israel who counseled him to tell Jewish audiences back here that Israel is an apartheid state (and to tell college audiences the opposite; Israeli dissimulation). There was a string of Israeli generals and officials’ names. Meridor, Ben Gurion, Barak, Netanyahu. And Michael Oren–favorably of course.