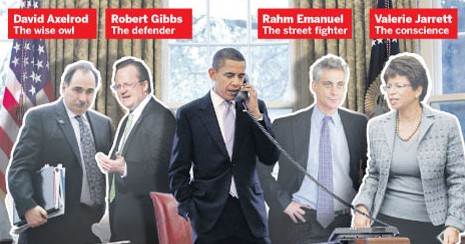 From the Financial Times:

At a crucial stage in the Democratic primaries in late 2007, Barack Obama rejuvenated his campaign with a barnstorming speech, in which he ended on a promise of what his victory would produce: “A nation healed. A world repaired. An America that believes again.”

Just over a year into his tenure, America’s 44th president governs a bitterly divided nation, a world increasingly hard to manage and an America that seems more disillusioned than ever with Washington’s ways. What went wrong?

Pundits, Democratic lawmakers and opinion pollsters offer a smorgasbord of reasons – from Mr Obama’s decision to devote his first year in office to healthcare reform, to the president’s inability to convince voters he can “feel their [economic] pain”, to the apparent ungovernability of today’s Washington. All may indeed have contributed to the quandary in which Mr Obama finds himself. But those around him have a more specific diagnosis – and one that is striking in its uniformity. The Obama White House is geared for campaigning rather than governing, they say.

In dozens of interviews with his closest allies and friends in Washington – most of them given unattributably in order to protect their access to the Oval Office – each observes that the president draws on the advice of a very tight circle. The inner core consists of just four people – Rahm Emanuel, the pugnacious chief of staff; David Axelrod and Valerie Jarrett, his senior advisers; and Robert Gibbs, his communications chief.

Two, Mr Emanuel and Mr Axelrod, have box-like offices within spitting distance of the Oval Office. The president, who is the first to keep a BlackBerry, rarely holds a meeting, including on national security, without some or all of them present.

With the exception of Mr Emanuel, who was a senior Democrat in the House of Representatives, all were an integral part of Mr Obama’s brilliantly managed campaign. Apart from Mr Gibbs, who is from Alabama, all are Chicagoans – like the president. And barring Richard Nixon’s White House, few can think of an administration that has been so dominated by such a small inner circle.

Steve Clemons, who provides an extended analysis of the FT piece, comments that unless Obama swiftly installs a Team B, “the Obama brand will be totally bust in the very near term.”