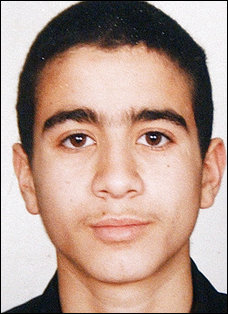 Omar Khadr, the youngest detainee at Guantanamo Bay, Cuba, was 15 when he allegedly threw a grenade that killed a U.S. Special Forces medic in Afghanistan. Now, more than seven years later, Khadr is drawing the Obama administration into a fierce debate over the propriety of putting a child soldier on trial.

The struggle against al-Qaeda has thrown up few detainees with as baleful and unlikely a background as Khadr’s — a father who moved his family to Afghanistan and inside Osama bin Laden’s circle of intimates when Omar was 10; a mother and sister who said the Sept. 11, 2001, attacks were deserved; and a brother, the black sheep of the clan, who said he became a CIA asset after his capture in Afghanistan.

This background has convinced U.N. officials, human rights advocates and defense lawyers that Khadr, a Canadian citizen, was an indoctrinated child soldier and, in line with international practice in other conflicts, should be rehabilitated, not prosecuted.