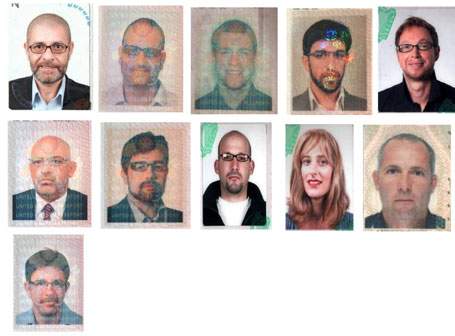 Dubai police have released the passport photographs of 11 suspects linked to the murder of Mahmoud al Mabhouh, a Hamas leader who was found dead in his hotel room in Dubai on January 20. All the suspects carried European passports. There’s no conclusive proof yet that this was a Mossad operation but the images above do at least carry suggestions that the individuals involved had taken measures to conceal their identities.

For instance, this crew all seem to go to an optician who specializes in retro-frames – hunky ugly ones that stand out until the operative stops wearing them or switches to an everyday designer frame. The woman, minus blond wig and ruby lipstick would also lose her signature look. Six shaved/croped heads – again, a few months of hair growth and they’ll be harder to pick out.

As Dubai police indicated in their briefing, this team even went to the lengths of avoiding using cell phones. Add all this up and this looks like an operation meticulously designed to be clandestine. The killers didn’t simply want to eliminate their target — they wanted to create the appearance that he had died of natural causes. It’s hard to ascribe that objective to a criminal motive or to imagine that a criminal organization would have the luxury of deploying eleven people to kill one man.

Dubai will issue arrest warrants soon for 11 Europeans suspected in the killing of a senior Hamas official, but its police chief said Monday that he was still not ruling out Israeli involvement.

“We do not rule out Mossad, but when we arrest those suspects we will know who masterminded it. [We have not] issued arrest warrants yet, but will do soon,” police chief Dahi Khalfan Tamim told reporters.

A leading suspect, who carried a French passport, had left Dubai for Munich via Qatar after the killing, Tamim added.

“We do not rule out (the Israeli intelligence agency) Mossad, but when we arrest those suspects we will know who masterminded it. [We have not] issued arrest warrants yet, but will do soon,” he said.

“Israel carries out a lot of assassinations in many countries, even in countries that it is allied to,” Tamim said, adding that Mabhouh may have been killed by electrocution.

Tamim said two Palestinians suspected of providing logistical support in Mabhouh’s killing were being held by police. Al Arabiya television said the pair had been handed over by Jordan.

Tamim said the 11 still wanted had rented a hotel room opposite Mabhouh’s around the time of his death. All are believed to have left Dubai.

The mercenaries were apparently dressed in tennis gear and visited several hotels on the day of the assasination in order to remain inconspicuous.

Violent crime is rare in Dubai, part of the UAE and a regional trading and tourism hub.

Like most Arab countries, the UAE has no diplomatic ties with Israel and Israelis are routinely denied entry.

It refused a visa for Israeli tennis player Shahar Peer to take part in a e2 million tournament in Dubai last year, although she was able to enter for this year’s championship.

The journal published what it termed “new details” about the operation, which has been widely attributed to Israel’s Mossad intelligence service. It said that one of the female agents dressed herself in the uniform of a reception clerk at Al Bustan Rotana, the hotel where Mabhouh was staying, and then knocked on his door.

When he opened it her fellow operatives rushed him and stunned him with an electric device, the journal said, then they injected poison into his veins, in order to disguise the cause of death.

The journal added that Dubai’s secret service had requested assistance in the investigation from its counterparts in Egypt and Jordan and from Interpol. Yet it seems unlikely that Egypt or Jordan could provide much help as both are hostile to Hamas. Indeed, both country’s secret services are engaged in their own war against Hamas operatives.

The journal said that Dubai’s government had ordered that Hamas itself be kept out of the probe, but Hamas is conducting its own investigation headed by the organization’s number two, Moussa Abu Marzook, with help from Iran and Syria.

Top Hamas figures have denied that al-Mabhouh was en route to Iran, a major Hamas backer.