Among commentators unable to see beyond the bankrupt perspective that the United States has the indispensable role of mediating a Middle East peace agreement (if such an agreement is ever to be reached), much is being made about Joe Biden’s tough words “behind closed doors”. Laura Rozen quotes from a Yedioth Ahronoth report:

People who heard what Biden said were stunned. “This is starting to get dangerous for us,” Biden castigated his interlocutors. “What you’re doing here undermines the security of our troops who are fighting in Iraq, Afghanistan and Pakistan. That endangers us and it endangers regional peace.”

The vice president told his Israeli hosts that since many people in the Muslim world perceived a connection between Israel’s actions and US policy, any decision about construction that undermines Palestinian rights in East Jerusalem could have an impact on the personal safety of American troops fighting against Islamic terrorism.

Help us fight the war on terrorism, Biden admonishes his Israeli friends. But we are, they think but in this instance are too polite to say. That’s why we’re taking over East Jerusalem. We’re fortifying the front-line.

It seems to me that the crux of the issue is not the latest upset; it is that the so-called peace process has always rested on an unbalanced foundation. Which is to say, Israel will only accept the direct involvement of third parties that have a clear bias in their favor.

If President Obama wanted to do something truly radical, it might not have to take the form of applying pressure — pressure that would be fiercely and effectively resisted by the Israel lobby. On the contrary, it could be to acknowledge that American efforts have failed — not only his own but those of all his predecessors — and that there comes a point when failure has been so persistent and become so predictable, that it is time to step aside.

There is someone else waiting in the wings, eager to step in — a man who regards dialogue as the essence of politics and who can make a stronger claim to be even-handed than anyone in the United States or Europe: Brazil’s President Lula da Silva. He also happens to be the most popular political leader in the world. 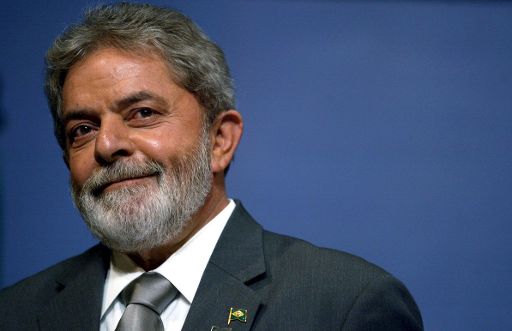 Ahead of his visit to the Middle East next week, where his first stop will be in Israel, Lula was interviewed by Haaretz:

Lula was one of the first leaders to host President Mahmoud Ahmadinejad after Iran’s blood-stained election of June 2009. Brazil was also one of only five countries to abstain from an International Atomic Energy Agency vote last November on a condemnation of Iran.

He is set to visit the Islamic Republic in May, where his hosts will repay him in kind for the red carpet he laid out for them in Brasilia last November. When asked how he’ll be able to win over the Israelis, whose vantage point is related to the trauma of the Holocaust, Lula replies: “I spoke with the president of Iran and made it clear to him that he cannot go on saying that he wants Israel’s liquidation, just as it is untenable for him to deny the Holocaust, which is a legacy of all humanity. I added that the fact that he has differences with Israel does not allow him to deny or ignore history.”

In a way that will undoubtedly disturb those who will host him in Israel next week, Lula draws a direct association between the failure to advance Israeli-Palestinian peace and his planned visit to Tehran; between the need to ensure that Iran will not manufacture nuclear weapons and the need to resolve the Middle East conflict; and between the failed attempts at mediation led by international players, first and foremost the United States, and the need to bring in fresh new players – Brazilians, in all likelihood.

“I talked about Iran with many leaders, and particularly with those whose countries have a seat on the Security Council,” he explains. “The Americans, the French, the British, the Russians and the Chinese all want to advance the Middle East peace process. But I also feel that the parties to the conflict and the people involved in the process have long since grown tired of it. So, the time has come to bring into the arena players who will be able to put forward new ideas. Those players must have access to all levels of the conflict: in Israel, in Palestine, in Iran, in Syria, in Jordan and in many other countries that are associated with this conflict. This is the only way we will be able to advance Israeli-Palestinian peace, and at the same time be able to say clearly to Iran that we are against the manufacture of nuclear weapons.”

Lula does not overlook any of the elements in this comprehensive linkage when asked about the fact that Israeli patience regarding Iran seems to have worn thin. “The leaders I spoke to believe that we must act quickly, otherwise Israel will attack Iran. I do not want Israel to attack Iran, just as I do not want Iran to attack Israel. In an orderly world, people have to learn to talk to one another.” Here he seems to be alluding critically to the “proximity talks” about to get underway between Israel and the Palestinian Authority.

“The appropriate partners from each country have to be found, and more serious talks conducted,” he continues. “The importance of talks between third- and fourth-rank officials [does not hold] even 1 percent of the importance of tete-a-tete talks between leaders. Politics is mainly contact. People have to look at each other, sense each other. A leader has to look into the eyes of his interlocutor instead of communicating with him through lower-level individuals.”

The Brazilian president says he is disappointed that all that remains of the Oslo Accords is “Nobel Prizes and photographs of people hugging each other,” as well as the fact that the Annapolis conference of November 2007, in which Brazil participated, did not have any follow-up. “This gives me serious doubts: Who really wants peace in the Middle East? Who has an interest in achieving a solution and who would like the conflict to continue? The impression is that someone is constantly working here as though he has hidden enemies, people who simply do not want an agreement to be reached.”

Lula describes himself as a negotiator, not an ideologue, a person who manages to get along with both Hugo Chavez and George W. Bush, with Shimon Peres and Mahmoud Ahmadinejad. He says he has never read a book in his life, even though everyone admires his “supreme wisdom” and “creative mind.” As a chairman of the workers union during the years of military rule in Brazil, he encountered and resolved many difficult conflicts.

He is well aware that he will be regarded as “naive” by his Israeli interlocutors. He is also familiar with the counter-rhetoric of Prime Minister Benjamin Netanyahu – who likens Ahmadinejad to Hitler, Iran to the Nazi regime and the world of 2010 to that of 1938. Lula’s assertive response is likely to surprise even those familiar with his arguments: “Anyone who compares Ahmadinejad and modern-day Iran to Hitler and the Nazis is having the same kind of radicalism of which Iran is being accused. Anyone who takes that line is not contributing in the least to the peace process which we want to create for the sake of the future. You cannot do politics with hate and resentment. Anyone who wants to do politics with hate and resentment should get out of politics. Nobody can rule a country through the liver. You have to rule a country with your head and your heart. Other than that, it’s best to stay somewhere else other than in politics

No doubt many veterans of the peace process would scoff at the notion that the Brazilian leader might succeed where those who have made this undertaking their professions have consistently failed. But if there is one place failure should succeed it is in the cultivation of humility.

As for the Israelis, there seems little prospect that they have the stomach for a genuinely even-handed approach and if they were to decline such an offer then that is undoubtedly their prerogative. They should be given these options: fair mediation or splendid isolation.

Claudio Lottenberg, the president of Sao Paulo’s Albert Einstein Hospital and a leader of Brazil’s Jewish community notes: “Lula is an important rising player in the international arena, and Israel should take account of this. It is important for Israel to have partners and allies besides the United States.”

But not only is Lula an important figure; Brazil itself clearly has much to teach a world which must become a multicultural success if it is to have any future at all.

Lula’s ambition to make a deep imprint in the Middle East goes beyond his country’s international status, to what he describes proudly as “a long Brazilian history of peace and a life of brotherhood in a region of diverse cultures. More than 120,000 Jews live here in full harmony with 10 million Arabs. It would seem that people can learn from us.” Brazil terms itself “the world’s largest Lebanese country” (some six million of Brazil’s Arabs are of Lebanese origin), “the second-largest African country in the world” (after Nigeria), and also the second-largest Italian and Japanese countries. It is a huge blend of peoples and cultures that do not know the meaning of friction.

You’d be hard-pressed to find someone in Rio de Janeiro who hasn’t heard of Saara Street, where Jews and Arabs sell clothing, toys and other items side by side. Whenever tension in the Middle East rises, local television crews show up to film the Brazilian version of coexistence. “All Brazilians are brothers,” they say – hence their ability, in their view, to bring brotherhood to all other nations.