In an interview on CNN, Hillary Clinton was refreshingly blunt in saying that Israel insulted the US:

But now that’s been clearly stated, why did Joe Biden have to cap the first insult by adding another when he said: “the United States has no better friend in the community of nations than Israel”?

That’s not true — and most Americans know it. Canada, Britain, Germany and Japan are all viewed more favorably by Americans than is Israel.

Is it because Israel is the most ill-mannered among America’s friends that it has to be flattered with this “best friend” status? Is it because Israel remains perpetually on the verge of throwing a tantrum that its wet nurse feels compelled to constantly sing sweet words to this troublesome infant?

At least there are a few Israelis who can see through this farce. 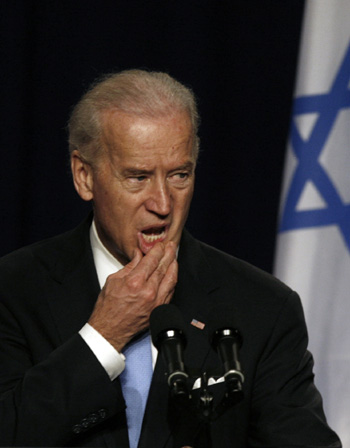 The apology offered by Prime Minister Benjamin Netanyahu and Interior Minister Eli Yishai recalls the joke about the servant who pinched the king’s bottom. En route to the gallows, the servant apologized: He thought it was the queen’s bottom.

The statement issued by Netanyahu’s bureau said that in light of the ongoing dispute between Israel and the United States over construction in East Jerusalem, the plans for new housing in the Ramat Shlomo neighborhood should not have been approved this particular week. It also said the premier had ordered Yishai to draft procedures that would prevent a recurrence. In other words, Yishai is welcome to submit more plans for Jewish construction in East Jerusalem next week, when U.S. Vice President Joe Biden will no longer be here.

Based on Biden’s reaction, it seems that he (and, presumably, his boss) has decided that it is better to leave with a few sour grapes than to quarrel with the vineyard guard. In his speech at Tel Aviv University, he said he appreciated Netanyahu’s pledge that there would be no recurrence. But what exactly does that mean? That next time he comes, the Planning and Building Committee will be asked to defer discussion of similar plans until the honored guest has left? With the media storm dying down, Netanyahu can breathe a sigh of relief.

In a sense, the uproar actually helped him: To wipe the spit off his face, Biden had to say it was only rain. Therefore, he lauded Netanyahu’s assertion that actual construction in Ramat Shlomo would begin only in another several years.

Biden might not know it, but the Palestinians certainly remember that this is exactly how East Jerusalem’s Har Homa neighborhood began: Then, too, Netanyahu persuaded the White House that construction would begin only in another several years.

But instead of being able to leave with an announcement that the talks have officially begun, Biden is leaving with the news that the Arab League has suspended its recommendation.

Netanyahu can thus hope that the Ramat Shlomo imbroglio has deferred the moment of truth when he must reveal his interpretation of “two states for two peoples.” And just in case anyone failed to realize how impartial a mediator the U.S. is, Biden said in his Tel Aviv speech that the U.S. has “no better friend” than Israel.

For Netanyahu, the cherry on top was that the onus for advancing the negotiations has now been put on the Arab states – just two weeks before the Arab League summit in Tripoli, where the league’s 2002 peace initiative will again be up for discussion. For months, U.S. President Barack Obama has been trying to persuade Arab leaders not to disconnect this important initiative from life support. His argument is that nothing would make Iranian President Mahmoud Ahmadinejad happier than a final blow-up of the peace process and the outbreak of a third intifada. And his joy would be redoubled if the fire started in Jerusalem.

But while the U.S. may be papering over the rift for now, Western diplomats said the bill will come due once the talks with the PA begin (assuming they do). The U.S. has already said it will submit bridging proposals of its own during these talks, and its anger and frustration over the Ramat Shlomo incident are likely to make it far more sympathetic to the Palestinians’ positions, the diplomats said.

For instance, Netanyahu wants security issues to top the talks’ agenda, an Israeli source said. But the Palestinians want the first issue to be borders, including in Jerusalem.

And the European Union, which had planned to upgrade various agreements with Israel this week in honor of the resumed talks, has now postponed the upgrade until it becomes clear whether the talks will in fact take place.

8 thoughts on “Why did Joe Biden insult America’s friends?”