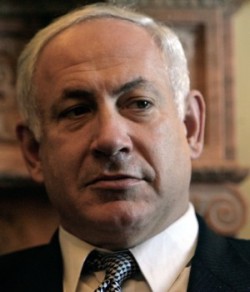 As Bill Clinton famously said about Benjamin Netanyahu in 1998, “Who the fuck does he think he is? Who’s the fucking superpower here?”

Twelve years later there is no sign that Bibi’s hubris has been tempered. In the midst of what Israel’s ambassador to the United States, Michael Oren, has told the country’s diplomats is the worst crisis in U.S.-Israeli relations in 35 years, what does Israel’s prime minister do? He declares that “building in Jerusalem – and in all other places – will continue in the same way as has been customary over the last 42 years.” In other words, Netanyahu reaffirms that Israel will continue on the same course that precipitated the crisis.

I imagine that in fairly short order Israel’s leaders will no longer have the task of figuring out new ways of insulting their guests; they simply won’t have any guests to insult.

Even so, Netanyahu has persuaded his loyal American supporters that he has eaten enough humble pie. For that reason it seems hard to imagine that he will go very far in meeting a set of demands that Haaretz says were put on his plate when he got lectured by Hillary Clinton on Friday.

These were the demands:

1. Investigate the process that led to the announcement of the Ramat Shlomo construction plans in the middle of Biden’s visit. The Americans seek an official response from Israel on whether this was a bureaucratic mistake or a deliberate act carried out for political reasons. Already on Saturday night, Netanyahu announced the convening of a committee to look into the issue.

2. Reverse the decision by the Jerusalem District Planning and Building Committee to approve construction of 1,600 new housing units in Ramat Shlomo.

3. Make a substantial gesture toward the Palestinians enabling the renewal of peace talks. The Americans suggested that hundreds of Palestinian prisoners be released, that the Israel Defense Forces withdraw from additional areas of the West Bank and transfer them to Palestinian control, that the siege of the Gaza Strip be eased and further roadblocks in the West Bank be removed.

4. Issue an official declaration that the talks with the Palestinians, even indirect talks, will deal with all the conflict’s core issues – borders, refugees, Jerusalem, security arrangements, water and settlements.

Two advisers of the prime minister, Yitzhak Molcho and Ron Dermer, held marathon talks Sunday with senior White House officials in Washington and U.S. Mideast envoy George Mitchell and his staff to try to calm the situation. Mitchell will return to Israel Tuesday and expects to hear if Netanyahu intends to take the proposed steps.

At the beginning of Sunday’s cabinet meeting, Netanyahu tried to convey a message that there was no crisis in relations with the United States. But he sent precisely the opposite message to Oren in Washington.

In Oren’s Saturday conference call with the Israeli consuls general, he said that the current crisis was the most serious with the Americans since a confrontation between Henry Kissinger and Yitzhak Rabin in 1975 over an American demand for a partial withdrawal from the Sinai Peninsula.

At Sunday’s cabinet meeting, Netanyahu said the matter had been blown out of proportion by the media. He added: “There was an unfortunate incident here that was innocently committed and was hurtful, and certainly should not have occurred.”

He said steps would be taken to prevent such cases in the future. “It is extremely important to understand that the State of Israel and the United States have common interests,” he said, adding that those interests “also require us to take decisions to change the situation in the country.”

Four consuls discussed the conference call with Haaretz. Some noted that in previous conference calls with Oren, the ambassador took pains to make clear that relations with the United States were excellent. This time, however, Oren sounded extremely tense and pessimistic. Oren was quoted as saying that “the crisis was very serious and we are facing a very difficult period in relations [between the two countries].”

Oren told the consuls to lobby congressmen, Jewish community leaders and the media to convey Israel’s position. He said the message to be relayed was that Israel had no intention to cause offense to Vice President Biden and that the matter had stemmed from actions by junior bureaucrats in the Interior Ministry and was caused by a lack of coordination between government offices. “It should be stressed that [our] relations with the United States are very important to us,” Oren reportedly said.

Several of the consuls suggested waiting, but Oren hinted that his approach reflected Netanyahu’s wishes. “These instructions come from the highest level in Jerusalem,” he was quoted as saying, adding that the utmost must be done to calm matters.

If only Washington could be more understanding and recognize that Israel has a dysfunctional bureaucracy. The Jewish state should be seen as a Middle Eastern version of Pakistan, then all these misunderstandings could be resolved. That at least is the counsel offered by Israel’s pre-eminent American booster, the Anti-Defamation League’s, Abe Foxman.