The Washington Post has a passage from Mark Perry’s new book, Talking to Terrorists: Why America Must Engage With Its Enemies. As Perry notes, talking to groups that the US government has labelled as “terrorists” is not only necessary but is a choice that has already been pursued and shown highly effective. As he recounts: “the real gamble in Iraq was not in deploying more troops to kill terrorists; the real gamble in Iraq was in sending marines to talk to them”.

This is how that happened: 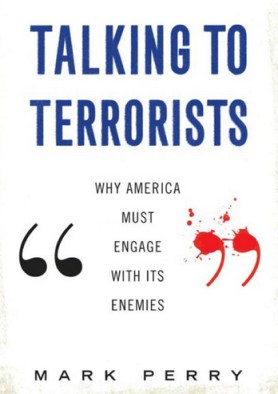 On July 23, 2005 Marine Corps Colonel John Coleman was sitting at his desk at Camp Pendleton, Calif. when he received a telephone call from Jerry Jones – an assistant to then-Secretary of Defense Donald Rumsfeld. Jones was frantic, telling Coleman that a group of Iraqi insurgents were battling an al-Qaeda militia at al-Qaim – an Iraqi city on the Syrian border.

“They need help,” Jones said. “It’s night there now, but they’re surrounded and if we don’t do something they’ll be wiped out.” Coleman acted quickly, placing a call to the Marine Corps headquarters at Camp Fallujah in Iraq.

The next morning, at sunrise, a “package” of Cobra helicopters attacked the al-Qaeda fighters, killing dozens and scattering the rest into the desert. “It was pretty nip and tuck there for awhile,” Coleman remembers, “but I had real confidence in the Marines.”

The little-known Marine intervention in al-Qaim is now seen as a turning point in America’s war in Iraq. It was the moment at which al-Anbar tribes – the insurgents — “awakened,” turning their guns on al-Qaeda and siding with the Americans.

But the Anbar Awakening did not happen suddenly.

For eighteen months prior to the Battle of al-Qaim, U.S. Marine Corps officers had been talking to the leaders of the Iraqi insurgency in a series of meetings that began in Amman, Jordan in July of 2004. The meetings were opposed by senior State Department and Pentagon officials, who castigated the Marines for “talking to terrorists.” The Marines vehemently disagreed, quoting an insurgent leader whom they had met in Amman. “We are not your enemy,” this leader said. “Al Qaeda is your enemy. We’re different. We’re not terrorists, we’re the insurgents. There’s a difference.”

Can what the United States did in Iraq serve as a model for a larger strategy – one that will bring stability to the entire region? More specifically, should America recruit the region’s more moderate Islamist parties (like Hamas, Hezbollah and the Muslim Brotherhood) to help in its fight against al Qaeda?

For most Americans, the suggestion seems outrageous; but for increasing numbers of policymakers, there are stark differences between the three groups and al-Qaeda: each of the movements has participated in national elections (Hamas won the parliamentary vote in the Palestinian territories in 2006, while Hezbollah and the Brotherhood hold seats in the Lebanese and Egyptian parliaments), each represents a distinct and growing constituency (and provides services for them), and each has rejected al-Qaeda’s Jacobin revolutionary ideology – and is targeted by bin Laden and his followers for actually endorsing democratic principles.

“Our habit of lumping all of these groups together, of putting Hamas, Hezbollah and the Muslim Brotherhood in the same class as al-Qaeda is a terrible mistake,” former Pentagon official James Clad says. “Hamas, Hezbollah and the Muslim Brotherhood are the three most important movements in the region today – and we don’t talk to any of them. I can understand not talking to al-Qaeda, they’re dead-enders and don’t represent anyone, but refusing to have a dialogue with groups that are respected in their own societies is short-sighted and counter-productive.”

Former Marine John Coleman would agree. In the wake of the Battle of al-Qaim, Coleman points out, the Anbar Awakening united 42 Anbar clans against al-Qaeda and transformed the war in Iraq.

“Our strategy was not simply a shift in American tactics, but in American thinking,” Coleman says. “It meant abandoning the easy language of the war on terrorism for a more sophisticated strategy.” Which is to say: the real gamble in Iraq was not in deploying more troops to kill terrorists; the real gamble in Iraq was in sending marines to talk to them.

Maybe that’s what we should be doing for the entire region.

1 thought on “Talking to terrorists”