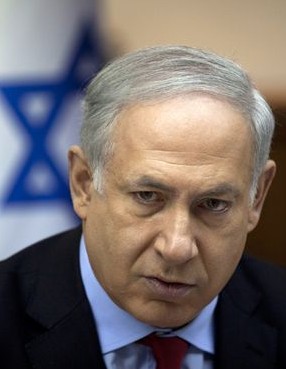 The headline for Aluf Benn’s article in Haaretz says it all: “Netanyahu leaves U.S. disgraced, isolated and weaker.”

Benn’s full account appears below but some of the comments elsewhere in the Israeli press reveal how deeply a racist outlook on the world is embedded within the Israeli perspective. As the Daily Telegraph reported:

Sending a clear message of his displeasure, Mr Obama treated his guest to a series of slights. Photographs of the meeting were forbidden and an Israeli request to issue a joint-statement once it was over were turned down.

“There is no humiliation exercise that the Americans did not try on the prime minister and his entourage,” Israel’s Maariv newspaper reported. “Bibi received in the White House the treatment reserved for the president of Equatorial Guinea.”

Why, the editors of Maariv might care to explain, would the president of Equatorial Guinea not be afforded respect during a visit to the White House?

The Telegraph says that upon his arrival to meet with President Obama, Netanyahu was presented with a set of 13 demands, key among those that Israel halt all new settlement construction in East Jerusalem:

When the Israeli prime minister stalled, Mr Obama rose from his seat declaring: “I’m going to the residential wing to have dinner with Michelle and the girls.”

As he left, Mr Netanyahu was told to consider the error of his ways. “I’m still around,” Mr Obama is quoted by Israel’s Yediot Ahronot newspaper as having said. “Let me know if there is anything new.”

When the two men met briefly an hour later, a short meeting failed to break the impasse.

The visit – touted as a fence-mending effort, a bid to strengthen the tenuous ties between Netanyahu and U.S. President Barack Obama – only highlighted the deep rift between the American and Israeli administrations.

The prime minister leaves America disgraced, isolated, and altogether weaker than when he came.

Instead of setting the diplomatic agenda, Netanyahu surrendered control over it. Instead of leaving the Palestinian issue aside and focusing on Iran, as he would like, Netanyahu now finds himself fighting for the legitimacy of Israeli control over East Jerusalem.

The most sensitive and insoluble core issues – those which when raised a decade ago led to the dissolution of the peace process and explosion of the second intifada – are now being served as a mere appetizer.

At the start of his visit, Netanyahu was tempted to bask in the warm welcome he received at the AIPAC conference, at which he gave his emotional address on Jerusalem.

Taking a page from Menachem Begin, he spoke not on behalf of the State of Israel, but in the name of the Jewish people itself and its millennia of history.

His speech was not radical rightist rhetoric. Reading between the lines, one could spot a certain willingness to relinquish West Bank settlements as long as Israel maintains a security buffer in the Jordan Valley.

But at the White House, the prime minister’s speech to thousands of pro-Israel activists and hundreds of cheering congressmen looked like an obvious attempt to raise political capital against the American president.

Knowing Netanyahu would be reenergized by his speech at the lobby, Obama and his staff set him a honey trap. Over the weekend they sought to quell the row that flared up during U.S. Vice President Joe Biden’s trip here two weeks ago, and U.S. Secretary of State Hillary Clinton described Netanyahu’s response to the ultimatums Washington presented to him as “useful.”

Special envoy George Mitchell made a televised visit to the prime minister’s bureau Sunday to invite Netanyahu to the White House. Washington, it seemed, was trying to make nice.

Far from it. Just when Netanyahu thought he had resolved the crisis by apologizing to Biden, Clinton called him up for a dressing down.

This time as well, Netanyahu almost believed the crisis had passed, that he had survived by offering partial, noncommittal answers to the Americans’ questions. Shortly before meeting with Obama, Netanyahu even warned the Palestinians that should they continue to demand a freeze on construction, he would postpone peace talks by a year.

His arrogant tone underscored the fact that Netanyahu believed that on the strength of his AIPAC speech, he could call the next few steps of the diplomatic dance.

But then calamity struck. At their White House meeting, Obama made clear to his guest that the letter Netanyahu had sent was insufficient and returned it for further corrections. Instead of a reception as a guest of honor, Netanyahu was treated as a problem child, an army private ordered to do laps around the base for slipping up at roll call.

The revolution in the Americans’ behavior is clear to all. On Sunday morning Obama was still anxiously looking ahead to the House of Representatives vote on health care – the last thing he wanted was a last-minute disagreement with congressmen over ties with Israel.

The moment the bill was passed, however, a victorious Obama was free to deal with his unruly guest.

The Americans made every effort to downplay the visit. As during his last visit in November, Netanyahu was invited to the White House at a late hour, without media coverage or a press conference. If that were not enough, the White House spokesman challenged Netanyahu’s observation at AIPAC that “Jerusalem is not a settlement.”

The Americans didn’t even wait for him to leave Washington to make their disagreement known. It was not the behavior Washington shows an ally, but the kind it shows an annoyance.

The approval of construction at the Shepherd Hotel in Sheikh Jarrah, announced before his meeting with Obama, again caught Netanyahu unawares. Apparently the special panel appointed after the Ramat Shlomo debacle to prevent such surprises failed its first test.

Netanyahu is having his most difficult week since returning to office, beginning with the unfortunate decision to relocate the planned emergency room at Ashkelon’s Barzilai Medical Center and lasting through his humiliating jaunt through Washington.

Returning to Israel today, Netanyahu will need to work hard to rehabilitate his image, knowing full well that Obama will not relent, but instead demand that he stop zigzagging and decide, once and for all, whether he stands with America or with the settlers.

The satisfaction that Washington gains from putting Netanyahu in his place may be short-lived. As Seth Freedman notes in The Guardian: “External pressure on Israel from the likes of the United States and European Union serves only to provoke a siege-mentality response from Israelis and plays into the hands of the paranoiacs on the Israeli right.”