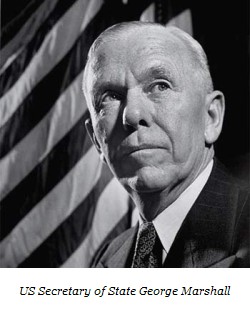 In early February of 2006, I submitted a book proposal about the wartime relationship between Generals George Marshall and Dwight Eisenhower to a group of New York publishers. I had worked on the proposal for nine months and believed it would garner significant interest. Two weeks after the submission, I received my first response — from a senior editor at a major New York publishing firm. He was uncomfortable with the proposal: “Wasn’t Marshall an anti-Semite?” he asked. I’d heard this claim before, but I was still shocked by the question. For me, George Marshall was an icon: the one officer who, more than any other, was responsible for the American victory in World War Two. He was the most important soldier of his generation — and a man of great moral and physical courage.

That Marshall was an anti-Semite has been retailed regularly since 1948 — when it became known that, by that time as US Secretary of State, he not only opposed the U.S. stance in favor of the partition of Palestine, but vehemently recommended that the U.S. not recognize the State of Israel that emerged. Harry Truman disagreed and Marshall and Truman clashed in a meeting in the Oval Office, on May 12, 1948. Truman relied on president counselor Clark Clifford to make the argument. Clifford faced Marshall: the U.S. had made a moral commitment to the world’s Jews that dated from Britain’s 1919 Balfour Declaration, he argued, and the U.S would be supported by Israel in the Middle East. The Holocaust had made Israel’s creation an imperative and, moreover, Israel would be a democracy. He then added: Jewish-Americans, were an important voting bloc and would favor the decision.

Marshall exploded. “Mr. President,” he said, “I thought this meeting was called to consider an important, complicated problem in foreign policy. I don’t even know why Clifford is here.” Truman attempted to calm Marshall, whom he admired — but Marshall was not satisfied. “I do not think that politics should play any role in our decision,” he said. The meeting ended acrimoniously, though Truman attempted to placate Marshall by noting that he was “inclined” to side with him. That wasn’t true — the U.S. voted to recognize Israel and worked to support its emerging statehood. Marshall remained enraged.

When Marshall returned to the State Department from his meeting with Truman, he memorialized the meeting:

I remarked to the president that, speaking objectively, I could not help but think that suggestions made by Mr. Clifford were wrong. I thought that to adopt these suggestions would have precisely the opposite effect from that intended by him. The transparent dodge to win a few votes would not, in fact, achieve this purpose. The great dignity of the office of the president would be seriously damaged. The counsel offered by Mr. Clifford’s advice was based on domestic political considerations, while the problem confronting us was international. I stated bluntly that if the president were to follow Mr. Clifford’s advice, and if I were to vote in the next election, I would vote against the president.

The Truman-Marshall argument over Israel has entered American lore – and been a subject of widespread historical controversy. Was Marshall’s opposition to recognition of Israel a reflection of his, and the American establishment’s, latent anti-Semitism? Or was it a credible reflection of U.S. military worries that the creation of Israel would engage America in a defense of the small country that would drain American resources and lives? In the years since, a gaggle of historians and politicians have weighed in with their own opinions, the most recent being Ambassador Richard Holbrooke. Writing in the Washington Post on May 7, 2008, Holbrooke noted that “beneath the surface” of the Truman-Marshall controversy “lay unspoken but real anti-Semitism on the part of some (but not all) policymakers. The position of those opposing recognition was simple – oil, numbers and history.”

But that’s only a part of the story. In the period between the end of World War Two and Marshall’s meeting with Truman, the Joint Chiefs of Staff had issued no less than sixteen (by my count) papers on the Palestine issue. The most important of these was issued on March 31, 1948 and entitled “Force Requirements for Palestine.” In that paper, the JCS predicted that “the Zionist strategy will seek to involve [the United States] in a continuously widening and deepening series of operations intended to secure maximum Jewish objectives.” The JCS speculated that these objectives included: initial Jewish sovereignty over a portion of Palestine, acceptance by the great powers of the right to unlimited immigration, the extension of Jewish sovereignty over all of Palestine and the expansion of “Eretz Israel” into Transjordan and into portions of Lebanon and Syria. This was not the only time the JCS expressed this worry. In late 1947, the JCS had written that “A decision to partition Palestine, if the decision were supported by the United States, would prejudice United States strategic interests in the Near and Middle East” to the point that “United States influence in the area would be curtailed to that which could be maintained by military force.” That is to say, the concern of the Joint Chiefs of Staff was not with the security of Israel — but with the security of American lives.

In the wake of my March 13 article in these pages (“The Petraeus Briefing: Biden’s embarrassment is not the whole story”) a storm of outrage greeted my claim that Israeli intransigence on the peace process could be costing American lives. One week after that article appeared, I called General Joe Hoar, a former CENTCOM commander and a friend. We talked about the article. “I don’t get it,” he said. “What’s the news here? Hasn’t this been said before?” If history is any guide, the answer is simple: it was said sixty years ago by one of America’s greatest soldiers. George Marshall wasn’t an anti-Semite. But he was prescient.

Mark Perry’s most recent book is Talking To Terrorists (Basic Books, 2010). He is also the author of Partners In Command: George Marshall and Dwight Eisenhower in War and Peace (2007) and Four Stars, The Inside Story of the Battle between the Joint Chiefs of Staff and America’s Civilian Leaders (1989).

[This article previously appeared in Foreign Policy and is reproduced here in full with the author’s permission.]