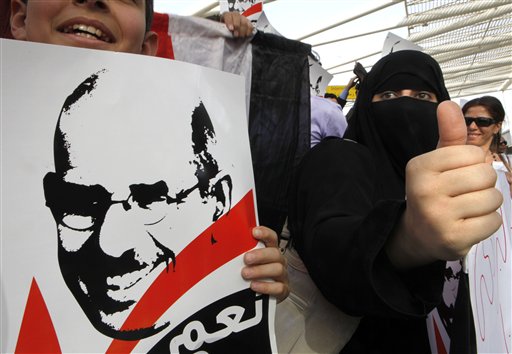 As the end of rule looms for Egypt’s autocratic leader, Christopher Dickey looks at the prospects for Hosni Mubarak’s replacement being a champion of democracy: the former IAEA director, Mohamed ElBaradei.

In the event that ElBaradei declares his candidacy for president, the Obama administration will face a dilemma: whether to support the rise of democracy on Israel’s borders if such a democracy would in all likelihood not be particularly Israel-friendly.

Mubarak’s regime has been propped up for decades by hundreds of millions of dollars a year in development assistance and well over $1 billion a year in military aid from Washington. That was a reward for its 1979 deal with Israel, which relies on Egypt to keep the peace. But Egypt’s stability and its commitments can no longer be taken for granted, as they have been for most of the last two decades, and the way Egypt navigates the potential chaos of the next few years could well set the course for the rest of the region.

So accustomed have we become to Egypt’s torpor that it’s easy to forget just how much weight it really carries in Arab culture and politics. Its population of more than 80 million is greater than Iraq, Syria, and Saudi Arabia combined. It could continue to try to muddle along on the same stagnant track with someone from the Mubarak establishment; it could slide toward chaos or Islamization, or have order imposed by a military regime like the one that ran Pakistan for most of the last decade. Or Egypt could actually start to lead the way toward a more democratic and progressive future for the whole Arab world. That’s where ElBaradei hopes to take it, and where his supporters pray they are heading.

These are nervous times, certainly, for anyone afraid of change. At the elegant bar of the Four Seasons Nile Plaza hotel in Cairo, the fin de règne mood hangs as heavy in the air as the smoke from Cuban cigars. For those with money, the country has never been so luxurious or so efficient; foreign investors continue to come, and the stock market continues to rise. But not much of that money trickles down, and the gap between rich and poor grows more striking every day. Twenty years ago, wealthy Cairenes lived among the people downtown or in nearby suburbs. Today they are secluded in gated communities—what ElBaradei calls “ghettos for the rich”—around golf courses built in the desert. Even among a group of businessmen with close ties to the government I heard grim speculation, over glasses of Spanish wine and plates of risotto, about some unseen, bloody revolution brewing among “the 60 million”: that three fourths of the population living in misery or on the edge of it.

There have been real revolutionary movements in the past. Radical Islamists murdered President Anwar Sadat in 1981, and Ayman al-Zawahiri, a member of that conspiracy, led a group known as Jamaa al-Islamiya in a terrorist campaign against the regime that lasted into the mid-1990s. After the government repressed, infiltrated, and obliterated his organization, Zawahiri fled the country to become, eventually, Osama bin Laden’s deputy and the man who actually runs Al Qaeda.

But most opposition groups are far less threatening. Indeed, the great paradox of the Egyptian police state lies in its long record cultivating a certain level of tame extremism—which it finds useful to justify its police tactics—while it crushes passionate moderation. It’s a cliché of Egyptian political commentary that if Mubarak did not have the Muslim Brotherhood to oppose him, he’d have to invent it. And ElBaradei has walked right into the middle of this political twilight zone.

The Mubarak government allows about 90 members of the “outlawed” Brotherhood to serve as “independents” in Parliament, where, with 20 percent of the votes, they make up the single largest opposition group. The Brotherhood, for its part, plays any angle it can, and has glommed onto the strongly secular ElBaradei. “I didn’t know a single Muslim Brother until I came [back] here. But the head of the Brothers’ parliamentary faction, Mohamed Saad el-Katatni, has come to my house a couple of times,” says ElBaradei, who adds that he was reassured when el-Katatni declared, “We are for a civil state, we are for democracy.”

2 thoughts on “The looming risk of Egyptian democracy”