After a recent poll indicated that in increasing numbers Palestinians are losing faith in the two-state solution, remarks by Reuven Rivlin, a senior member of Likud and the Speaker in Israel’s parliament, suggest that a one-state solution may be more likely than most commentators generally imagine. 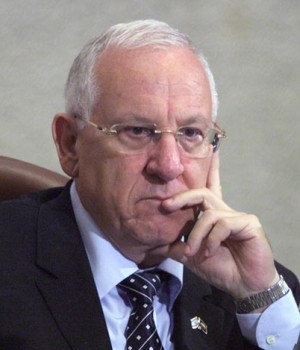 Knesset Speaker Reuven Rivlin said Thursday that he would rather accept Palestinians as Israeli citizens than divide Israel and the West Bank in a future two-state peace solution.

Speaking during a meeting with Greece’s ambassador to Israel Kyriakos Loukakis, Rivlin said that he did not see any point of Israel signing a peace agreement with the Palestinian Authority as he did not believe PA President Mahmoud Abbas “could deliver the goods.”

Referring to the possibility that such an agreement could be reached, Rivlin said: “I would rather Palestinians as citizens of this country over dividing the land up.”

Late last year, Rivlin said in a Jerusalem address that Israel’s Arab population was “an inseparable part of this country. It is a group with a highly defined shared national identity, and which will forever be, as a collective, an important and integral part of Israeli society.”

In a speech given in the president’s residence, the Knesset speaker called for a fundamental change in relations between Jews and Arabs in Israel, urging the foundation of a “true partnership” between the two sectors, based on mutual respect, absolute equality and the addressing of “the special needs and unique character of each of the sides.”

Rivlin also said that “the establishment of Israel was accompanied by much pain and suffering and a real trauma for the Palestinians,” adding that “many of Israel’s Arabs, which see themselves as part of the Palestinian population, feel the pain of their brothers across the green line – a pain they feel the state of Israel is responsible for.”

“Many of them,” Rivlin says, “encounter racism and arrogance from Israel’s Jews; the inequality in the allocation of state funds also does not contribute to any extra love.”