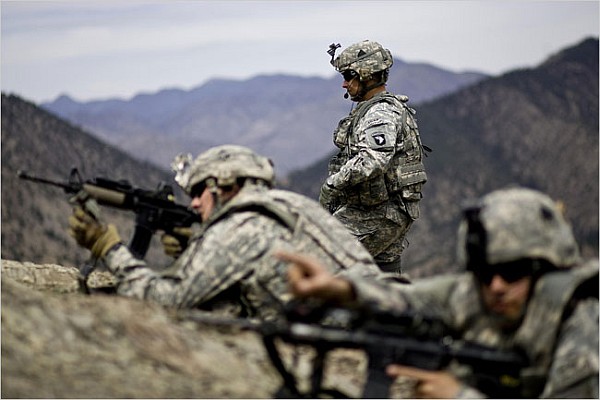 The United States is at war in Pakistan. It will be up to historians to decide when this war began.

“Drone Strikes Pound West Pakistan” says the headline above a brief report in the New York Times. After the CIA fired 18 missiles resulting in at least 14 deaths on Tuesday, the operation was described merely as “a continuation of the air campaign to degrade the capabilities of Al Qaeda, the Pakistani Taliban and the Afghan Taliban fighters now working together in North Waziristan” (my emphasis).

“Continuation” is another name for escalation when developments that should prompt alarm have already been inoculated with the name “necessity.”

A course of action that if it initiated by George Bush might have been seen as an expression of his intemperate nature, when pursued by no-drama Obama is instead billed as a judicious expansion in the use of force.

But the danger of escalation — now as always — is that the seemingly carefully calibrated expansion of a war has unintended and far-reaching consequences. Only after it’s too late do we learn that the calibration rested on nothing more than wishful thinking.

The logic behind the apparent necessity of expanding the war into Pakistan has been evident ever since the war in Afghanistan began. For Bush, the dangers implicit in crossing the Durand Line seemed to provoke fear, but his successor seems intent on showing he lacks such trepidation. North Waziristan is where Obama gets to prove that he has the steel that Bush lacked — or so the script says.

In this context the Times Square attempted bombing has acquired particular significance. If the lack of a credible endgame in Afghanistan would make it even more difficult to justify expanding the war, then a scare in New York could be useful in prompting a renewed sense of urgency.

Security experts in Washington have since begun to call Shahzad’s bombing attempt a “game changer” in the war against terror and have been signalling the possibility of an incursion of US forces into Pakistani territory. Several factors point to the fact that such an option is indeed being considered by the Obama administration and Pentagon officials. First, conservative lawmakers on Capitol Hill have long been sounding alarm bells asking for a wider presence in Pakistan to accomplish the goals of the war on terror. Recent hearings held on Capitol Hill have focused on groups such as Jaish-i-Muhammad and Lashkar-i-Taiba that do not operate in the areas currently being targeted by aerial drone attacks.

In a hearing held in March, several US congressmen noted that the Lashkar “had put the world on notice that they intend to escalate the carnage and take it worldwide”. Other analysts have repeatedly pointed to the necessity of expanding drone strikes into Quetta to target the Quetta shura which supposedly runs the Taliban operations. While Shahzad’s connections are not currently traced to groups other than the Taliban, the fact that he spent time in Pakistan bolsters the position of those who insist that a wider military presence in Pakistan is crucial to eliminating the threat to the American homeland.

Second, the problems faced by the highly publicised US/Nato initiatives in Marja and Kandahar in Afghanistan have created a political demand for a more decisive endgame in the region. In the footsteps of the Marja offensive in early April, The New York Times reported that many of the gains made in the area by the US Marines’ costly offensive had largely been reversed and many Taliban had moved back into the area. The Kandahar offensive due to start soon has also been the subject of lowered expectations, with experts saying that the easy absorption of Taliban fighters into the local population and the lack of visible centres of Taliban control make it difficult to win a decisive victory in the area.

The reason why the failure of both offensives — one yet to begin — is relevant to the Pakistan equation is simple: with the beginning of a US withdrawal already announced for 2011, there is immense political pressure on the Obama administration to produce some semblance of victory. The expansion of the Afghanistan war into Pakistani territory would not only be a culmination of the Obama campaign’s slogans of Pakistan being the real problem, it would also provide a visible endgame to the vexing and increasingly intractable issue of whether the war in Afghanistan has really eliminated global terrorism.

If Obama is now a victim of his own campaign logic — the repetition of half-baked slogans must surely be as harmful to those who utter them as it is to those who hear them — this logic is nevertheless looking less persuasive outside the administration.

Noah Shachtman notes that the skepticism once only voiced by counter-insurgency wonks like David Kilcullen and Andrew Exum has now percolated right into the mainstream media.

“If you go into Pakistan and talk to college kids, which is what we did, these drone attacks are feeding this narrative: this is what we [Americans] are aiming to do. We’re aiming to kill Muslims,” Leslie Stahl said today on MSNBC’s Morning Joe.

“Let’s say China was launching drone attacks on Idaho, we would be pretty angry too. We are launching attacking against a people were not at war with, officially,” Joe Scarborough responded. “I would rather us go after the terrorists — individual terrorists — drag ‘em out, interrogate ‘em, get information — instead of dropping bombs that kill four year-old little girls. That dismember grandmoms that happen to be in the family compound. That seems immoral.”

The decision to dramatically escalate the drone war was done behind closed doors, with no public debate about whether the strikes were the best way to smash the jihadist networks based in Pakistan’s tribal wildlands. Perhaps now, we’ll have that discussion.

3 thoughts on “Is Obama moving to escalate the war in Pakistan?”