When Israeli officials are pressed to justify the fact that Israel has prevented the reconstruction of thousands of homes it destroyed during the war on Gaza, they say that if construction materials were allowed into Gaza, these would be commandeered by Hamas and used to fortify its bunkers.

In an interview Khalid Meshaal, the Hamas political bureau chief in Damascus, gave with Charlie Rose this week, the Hamas leader directly addressed this issue.

Meshaal’s message to the Obama administration and to the American people was this:

It’s time to end this embargo on Gaza, because it’s immoral, unethical and it failed in achieving its political objectives. And it is the right of the Palestinian people in Gaza to live like all other people without any embargo, because Gaza today is the biggest prison in the world and in history.

You know that Israel in the last war destroyed tens of thousands of houses, hospitals and universities, and it is the responsibility of the international community and especially of the United States of America to reconstruct what [has] been destroyed by Israel in Gaza. And we do not have it as a condition that this construction operation to be done through Hamas. No. As I told [Russia’s] President Medvedev, the international community can develop an international mechanism that is independent to introduce the construction materials into Gaza and to supervise the rebuilding, reconstruction of the houses and schools destroyed by Israel. Because our mission is to service our people. We want the Palestinian people in Gaza to live simply in houses in winter and in summer. And this is the responsibility of the international community. Unfortunately, some Palestinian leaderships lie to the Americans and to the Europeans when saying that Hamas has it as a condition to supervise the reconstruction. We do not have this as a condition. We tell the whole world, come to Gaza. Reconstruct the destroyed houses. 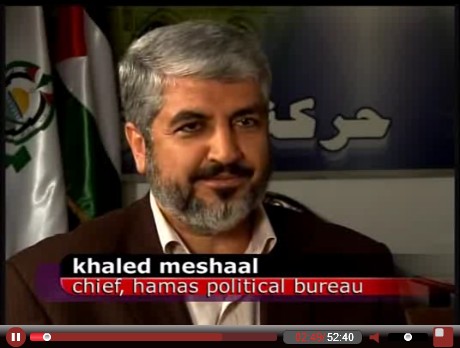