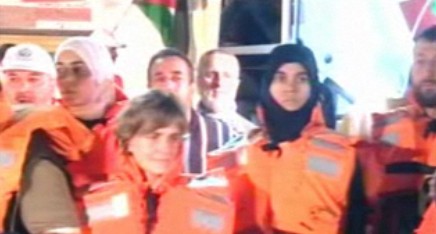 Activists on Freedom Flotilla ships have put on life jackets as Israeli navy approaches at around 4PM Eastern. The flotilla remains in international waters outside an exclusion zone which Israel has already extended from 20 to 68 miles. The flotilla is still 120 miles from Gaza.

The Israeli commentator, Nahum Barnea, notes: “Netanyahu must certainly be disturbed by the unpleasant photos of the clash between IDF forces and the protestors. Yet what should concern him to a much greater degree is the ongoing deterioration in our ties with Turkey. This is not a public relations problem: It’s a strategic problem.”

The largest contingent of activists on board the Freedom Flotilla comes from Turkey.

Turkish Prime Minister Recep Tayyip Erdogan said that the convoy of ships, including Turkish ships, carrying aid to Gaza was just a move of non-governmental organizations and had nothing to do with Turkish government.

“It is also an international move of the civil society. It is completely a step taken with humanitarian purposes,” Erdogan told reporters in Brazil.

“I think there will not be any problem if Israel shows a humanitarian stance to this humanitarian aid,” he said.