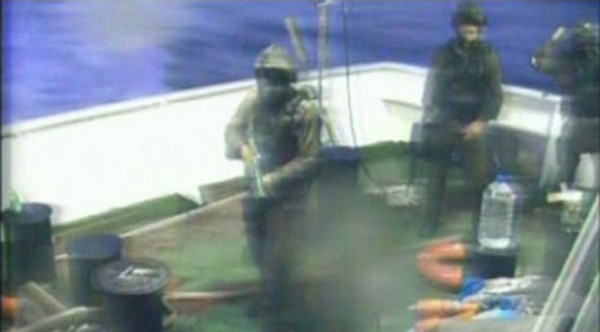 When a civilian passenger ship comes under military attack in international waters, should we be surprised — or even critical — when some of the passengers mount a defense?

According to CNN, which has made itself into a mouthpiece for the Israeli Defense Forces, the flotilla massacre was a “skirmish”, which the dictionary defines as a “minor battle in war, as one between small forces.”

CNN/the IDF would have the world believe that Israel’s elite commandos unexpectedly met an armed force on the decks of the Mavi Marmara. Some of the Israeli soldiers were so afraid they jumped into the sea to save themselves from Arabic-speaking assailants, Israeli officials claimed.

Turkish officials have denied claims leveled by Israeli authorities that weapons were onboard one of the six aid ships attacked by Israel on Monday.

Israel and its lackeys in the US media might try to characterize what happened in the Mediterranean today as an “incident,” or “skirmish,” or an “ambush.”

But if the IDF met “unexpected resistance,” what exactly did they expect? A reception committee with tea and breakfast? Didn’t they see the resistance the Viva Palestina convoy put up last year when challenged by Egyptian security forces?

The live video feed coming from the Mavi Marmara during its voyage from Turkey would have provided invaluable intelligence for the IDF and I have little doubt that they watched it carefully. A number of observations the Israelis must have made may have significantly influenced their calculations and miscalculations.

One of the striking demographic features of the group of passengers was the average age — having watched many hours of the feed, I’d put the average age at about 35-40 with a significant number of “retirees” — this was not a bunch of young hotheads.

Also, the group was overwhelmingly Middle Eastern and Turkish and male. The risk that Israeli violence would result in the death of another Rachel Corrie was relatively low.

Put together these two factors — the expectation that the age of the passengers might make them somewhat less volatile and the fact that they largely came from countries that Israel has less concern about offending — and you get the perfect cocktail for Israeli hubris.

As for the fact that elite Israeli soldiers can in one instant be portrayed as invincible and yet the next as hapless victims — that is a paradox that can be resolved only in the minds of Israelis.

In the eyes of much of the world, this was a massacre, the dead will be seen as martyrs, and the moral bankruptcy of the Jewish state revealed in sharper clarity than ever before.