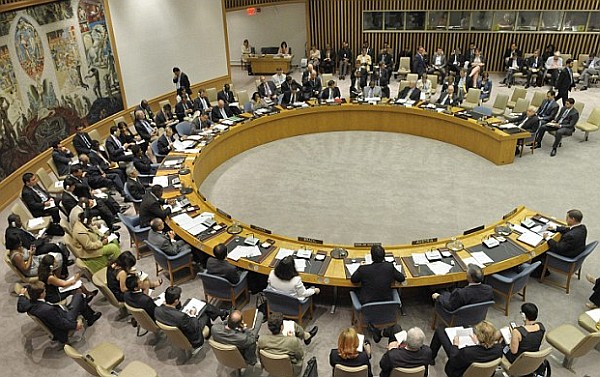 After the flotilla massacre committed by Israeli forces, Turkey’s call for an emergency meeting of the UN Security Council yesterday was to be expected. Turks are assumed to be among the dead — whose names and nationalities have still not been released. There are now hundreds of Turks being held in detention in Israel and Turkish ships were captured illegally in international waters in an action Turkey’s foreign minister described as “tantamount to banditry and piracy.”

What was equally predictable was that the Obama administration would only offer its support if action from the UN was so weak as to be worthless.

Had events of the last two days not disrupted their agendas, President Obama and Prime Minister Netanyahu would today have been servicing their individual political needs with smiles and handshakes on the steps of the White House. Absent that much-anticipated saccharine event, Obama was not about to turn around and support a stern rebuke to Israel.

The key Turkish demand presented to the Security Council was that the “blockade of Gaza must be ended immediately and all humanitarian assistance must be allowed in.”

There can be no better response from the international community to this tragedy than to achieve urgently a durable resolution to the Gaza crisis.

I call on the Government of Israel to open the crossings to allow unfettered access for aid to Gaza, and address the serious concerns about the deterioration in the humanitarian and economic situation and about the effect on a generation of young Palestinians.

Universally there were calls for an inquiry. But the key to whether such an inquiry would be of any real value would be, minimally, its independence, and ideally that it would be international.

It does not call for an end to the siege but says “the situation in Gaza is not sustainable.” And there’s Obama’s lie.

Whether the siege of Gaza is lifted or sustained is up to Washington. If, when Netanyahu finally meets Obama, the US president was to say the embargo must end, Israel would have no choice. The siege of Gaza can only continue with US support and thus far, Obama refuses to withdraw that support. He says the situation is not sustainable, but through his actions Obama has a direct hand in perpetuating the suffering in Gaza.

“Unsustainable” is the signature of Obama’s self-declared impotence. It’s change over which he would like everyone else to believe he has no control. It’s the deceit through which he tells Americans and the world, I would if I could but I can’t.

Before the Security Council issued its statement and before it became clear that Obama was yet again going to throw away an opportunity to demonstrate his commitment to upholding international law, Stephen Walt wrote:

President Obama likes to talk a lot about our wonderful American values, and his shiny new National Security Strategy says “we must always seek to uphold these values not just when it is easy, but when it is hard.” The same document also talks about a “rule-based international order,” and says “America’s commitment to the rule of law is fundamental to our efforts to build an international order that is capable of confronting the emerging challenges of the 21st century.”

Well if that is true, here is an excellent opportunity for Obama to prove that he means what he says. Attacking a humanitarian aid mission certainly isn’t consistent with American values — even when that aid mission is engaged in the provocative act of challenging a blockade — and doing so in international waters is a direct violation of international law. Of course, it would be politically difficult for the administration to take a principled stand with midterm elections looming, but our values and commitment to the rule of law aren’t worth much if a president will sacrifice them just to win votes.

More importantly, this latest act of misguided belligerence poses a broader threat to U.S. national interests. Because the United States provides Israel with so much material aid and diplomatic protection, and because American politicians from the president on down repeatedly refer to the “unbreakable bonds” between the United States and Israel, people all over the world naturally associate us with most, if not all, of Israel’s actions. Thus, Israel doesn’t just tarnish its own image when it does something outlandish like this; it makes the United States look bad, too. This incident will harm our relations with other Middle Eastern countries, lend additional credence to jihadi narratives about the “Zionist-Crusader alliance,” and complicate efforts to deal with Iran. It will also cost us some moral standing with other friends around the world, especially if we downplay it. This is just more evidence, as if we needed any, that the special relationship with Israel has become a net liability.

In short, unless the Obama administration demonstrates just how angry and appalled it is by this foolish act, and unless the U.S. reaction has some real teeth in it, other states will rightly see Washington as irretrievably weak and hypocritical. And Obama’s Cairo speech — which was entitled “A New Beginning” — will be guaranteed a prominent place in the Hall of Fame of Empty Rhetoric.

Irretrievably weak and hypocritical — unfortunately the evidence was there even before Obama took office. His character, commitments, calculations and cynicism were all on open display as he watched in silence Israel’s war on Gaza.