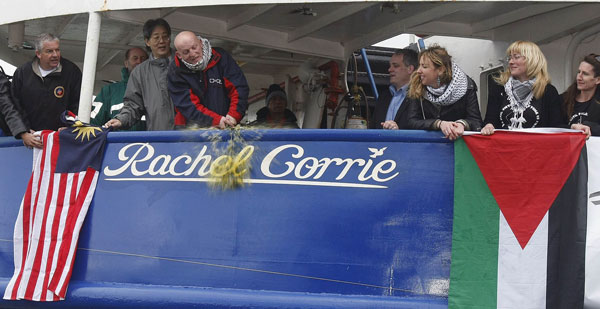 The MV Rachel Corrie, a cargo ship in the Freedom Flotilla whose passage from Ireland was delayed by mechanical difficulties, is now hours away from its destination. 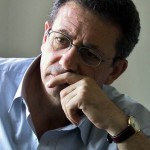 “I commend this courageous action of brave international civilians who are carrying essential medical, education and construction materials denied by Israeli suffocating and illegal siege on Gaza. It is vital that they have maximum support by the international community!” a Palestinian political leader, Dr Mustafa Barghouthi, told Nobel Peace laureate Mairead Maguire today. She and other activists on board the cargo ship carrying humanitarian aid from the Republic of Ireland to Gaza, said they hope to reach their destination by Saturday morning.

“The world is watching,” said Dr Barghouthi, calling upon the international community to ensure the safe passage of the Rachel Corrie; he urged the EU representatives to take immediate and concrete steps in pressuring Israel to refrain from blocking the ship.

An appeal has gone out calling on Irish Americans to support the effort to end the siege of Gaza. Lorna Siggins, reporting from the Rachel Corrie for the Irish Times, writes:

Former UN assistant secretary general Denis Halliday has called on the [Irish] government to highlight the situation of the Gaza-bound Irish aid ship Rachel Corrie with US president Barack Obama’s administration and the EU.

Speaking by satellite phone on board the Rachel Corrie yesterday several hundred miles from Gaza, Mr Halliday said it was imperative that the Obama administration and the EU supported Ireland’s call on the Israeli authorities to ensure safe passage for the ship, which is carrying aid supplies.

“We feel that, like the UN, the EU has failed the Palestinians and we feel that the EU could exert more pressure in terms of trade links, which the Israelis are very dependent on,” he said.

Mr Halliday, a Connemara resident, confirmed that Minister for Foreign Affairs Micheál Martin had been in phone contact with the ship over the past two days .

“We are very grateful to the Minister, who has been completely supportive, but we need more,” Mr Halliday said.

“We also feel there is a role for the Irish diaspora here, in the US and elsewhere to lobby politicians over this continued illegal blockade of Gaza, which is causing such hardship to the Palestinian people.”

The issue of the Gaza blockade has tremendous resonance in Ireland, partly because of Ireland’s high degree of engagement in international humanitarian causes — John Ging, head of the UN Relief and Works Agency in Gaza, who had called on the international community to break the siege by sending ships loaded with aid, is also Irish — but also, of course, because the Irish people have some experience with the consequences for civilians of a colonial blockade.

Between 1845 and 1850, more than a million Irish people starved to death under British rule while, as Sinead O’Connor famously noted, food was shipped out of Ireland under armed guard. A million more fled Ireland to escape starvation, many to America, including Falmouth Kearney, President Obama’s great-great-great grandfather.

Many Irish people — and Irish-Americans — take the responsibilities of this legacy very seriously.

4 thoughts on “MV Rachel Corrie due to reach Gaza within hours. “The world is watching” — Mustafa Barghouthi”