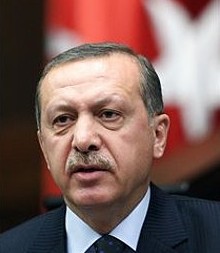 “Israel must pay the price of the blood it shed,” said Turkey’s Prime Minister Recep Tayyip Erdogan this week as he honored the lives of those who were “martyred” defending the Mavi Marmara.

The clash between Turkey and Israel comes at a moment when the state which was once the seat of the Ottoman Empire is reclaiming some of its historic regional significance.

But this Turkish revival is not being welcomed by the United States. The New York Times says:

Turkey is seen increasingly in Washington as “running around the region doing things that are at cross-purposes to what the big powers in the region want,” said Steven A. Cook, a scholar with the Council on Foreign Relations. The question being asked, he said, is “How do we keep the Turks in their lane?”

From Turkey’s perspective, however, it is simply finding its footing in its own backyard, a troubled region that has been in turmoil for years, in part as a result of American policy making.

While many Israeli’s might currently be nurturing the belief that the Jewish nation just struck back against some kind of Turkish assault, hardly anyone one else harbors such delusions about who has been wronged. Erdogan emphatically asserts that Israel will pay a price.

This is a moment, Michael Vlahos suggests, in which a Turkish Renovatio is taking place.

“This is language that we have not heard since the time of Gamal Abdul Nasser.” Thus wrote the influential chief editor of Al-Quds al-Arabi newspaper, referring to Turkish Prime Minister Recep Tayyip Erdogan’s fiery response to the Israeli assault on the Gaza flotilla — adding that such “manly” positions and rhetoric had “disappeared from the dictionaries of our Arab leaders (since the demise of Egyptian President Gamal Abdul Nasser).” He lamented, “Arab regimes now represent the only friends left to Israel.” (From the CSM here.)

What is Renovatio? Simply, it is a national revival that takes the form of a restoration: Where things once right and true triumphantly return. Renovatio represents identity reborn.
[…]
A contemporary Turkey that is robustly part Western and also part Islamist in fact represents the most valuable model for the future Ummah — and especially for its Arab-Urdu core.

Enough time has passed now that old Arab-Turkish scores should have receded, just as they have recently among Turks and Greeks. The Mavi Marmara incident — if followed up strongly and unrelentingly — can assert a neo-Ottoman claim to symbolic leadership of an emerging Muslim Renovatio.

Such a restoration would unfold in ritual terms. But is that not the point — the point that the US and Israel stubbornly refuse to see? The whole design of the fabled Khilafat was in reality always that of a Muslim Commonwealth, not of a unitary state (save for Al Qaeda fantasists). Renovatio means a restoration of collective identity and purpose. But it also requires a leader: A Champion who will right wrongs and bring Islam back to the glory of the “Rightly Guided.” Not as political order but as renewed collective consciousness.

5 thoughts on “A Turkish revival”