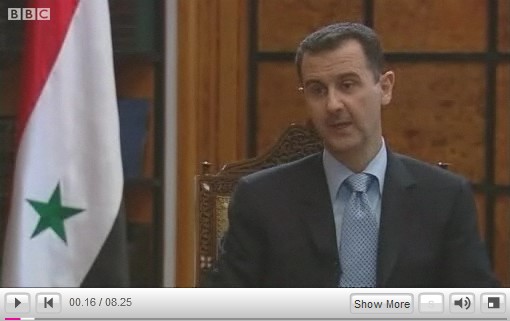 A few days before the Israeli attack on the Mavi Marmara, Charlie Rose did a full length interview with the Syrian president which is well worth watching. He’s a serious and articulate strategic thinker.

Assad gets far less attention in the US media than he deserves. To some extent this may result from his reserved manner and the perception that he rules in the shadow of his father, the late Hafez al-Assad, but to a larger extent I see it as standard-fare Washington contempt for Syria itself. Perennially branded a rogue state, a relatively minor oil producer, Syria is a country that interests America no more than can be measured by its willingness (or unwillingness) to bow to American pressure.

But Assad belongs to and is articulating the vision of a new generation of regional leaders who recognize that the fate of the Middle East rests firmly in the hands of those who refuse to define themselves on the basis of their relationship with the United States.