On September 11, 2001, George Bush changed the way Americans look at the world and the success with which he accomplished this feat is evident in the fact that his perspective largely remains unchallenged — even among many of his most outspoken critics. Bush’s simplistic for-us-or-against-us formula was transparently emotive yet utterly effective.

For almost a decade, Americans have been told to look at the world through the lens of “terrorism” and while differences of opinion exist about whether the lens has too wide or narrow an angle or about the extent to which it brings things into focus, those of us who say the lens is so deeply flawed that it should be scrapped, remain in a minority.

The Obama administration may now refrain from using the term itself, preferring instead “violent extremists,” but the change is merely cosmetic (as are so many other “changes” in the seamless continuity between the Bush- and post-Bush eras).

A couple of days ago Philip Weiss drew attention to the fact that when former Israeli foreign minister Tzipi Livni described her parents as “freedom fighters,” Deborah Solomon, her interviewer in the New York Times, echoed Livni’s sentiment by saying that the fight for Israel’s independence took place in “a more romantic era.”

As Weiss notes, Livni’s parents belonged to the Irgun, the Zionist group which blew up the King David Hotel in Jerusalem on July 22, 1946, killing 91 and injuring 46.

The first public account of what had happened that day was accidentally released in advance of the bombing.

In By Blood and Fire, Thurston Clark writes: 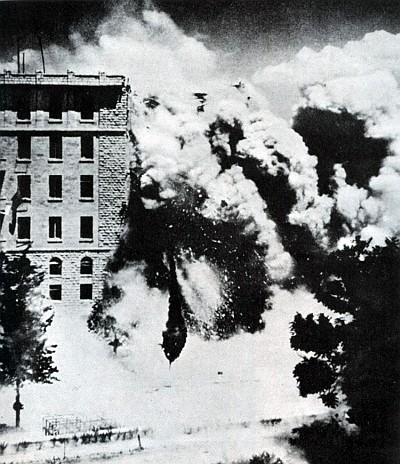 “Jewish terrorists have just blown up the King David Hotel!” This short message was received by the London Bureau of United Press International (UPI) shortly after noon, Palestine time. It was signed by a UPI stringer in Palestine who was also a secret member of the Irgun. The stringer had learned about Operation Chick but did not know it had been postponed for an hour. Hoping to scoop his colleagues, he had filed a report minutes before 11.00. A British censor had routinely stamped his cable without reading it.

The UPI London Bureau chief thought the message too terse. There were not enough details. He decided against putting it on the agency’s wire for radio and press until receiving further confirmation that the hotel had been destroyed.

Despite the efforts of Irgun leaders to restrict knowledge of the target and timing of Operation Chick, there were numerous other leaks. Leaders in both the Haganah and Stern Gang knew about the operation. Friends warned friends. The King David had an extraordinary number of last-minute room cancellations. In the Secretariat [the King David’s south wing that housed the headquarters of the British government in Palestine], more than the usual number of Jewish typists and clerks called in sick.

The next day the British prime minister, Clement Attlee referred to the bombing as an “insane act of terrorism” while a few days later the US president, Harry Truman, wrote “the inhuman crime committed… calls for the strongest action against terrorism…”

That was 64 years ago. From the sheltered perch of the New York Times, that’s apparently far enough back in history that it can now be referred to as a “romantic era.”

It’s hardly surprising then that many observers with an interest in justice for Palestinians take offense at the New York Times’ complicity in papering over the reality of Jewish terrorism. Yet here’s the irony: the effort to promote an unbiased use of the term “terrorism” simply plays into the hands of the Israelis.

The word has only one purpose: to forestall consideration of the political motivation for acts of violence. Invoke the word with the utmost gravity and then you can use your moral indignation and outrage to smother intelligent analysis. Terrorists do what they do because they are in the terrorism business — it’s in their blood.

So, when Tzipi Livni calls her parents freedom fighters, I have no problem with that — she is alluding to what they believed they were fighting for rather than the methods they employed. Moreover, by calling people who planted bombs and blew up civilians in the pursuit of their political goals, “freedom fighters,” Livni makes it clear that she understands that “terrorism” is a subjective term employed for an effect.

When Ehud Barak a few years ago acknowledged that had he been raised a Palestinian he too would have joined one of the so-called terrorist organizations, he was not describing an extraordinary epiphany he had gone through in recognizing the plight of the Palestinians. He was merely being candid about parallels between groups such as the Irgun and Hamas — parallels that many Israelis see but less often voice.

The big issue is not whether the methods employed by Zionist groups such as the Irgun could be justified but whether the political goals these groups were fighting for were legitimate. Zionism would not have acquired more legitimacy if it had simply found non-violent means through which it could accomplish its goal of driving much of the non-Jewish population out of Palestine.

We live in an era in which “terrorism” — as a phenomenon to be opposed — has become the primary bulwark through which Zionism defends itself from scrutiny. Keep on playing the terrorist-naming game and the Zionists win.

6 thoughts on “The terrorist-naming game”