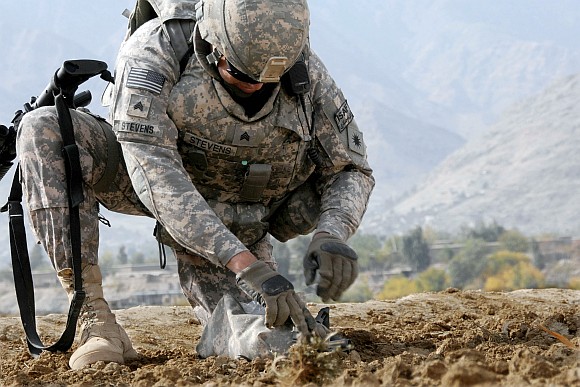 Sgt. Jason Stevens, a horticulturist with the California Army National Guard's 40th Infantry Division Agribusiness Development Team, gathers a soil sample from a field alongside the main road in Marawara, Afghanistan, Nov. 23, 2009. The ADT stopped in Marawara to meet with local farmers about their crop output and farming in the area, as well as to gather soil samples to learn how crop production might be increased in the area.

If wars could be won through slick advertising, no one would be better qualified to become the US commander in Afghanistan than General David Petraeus.

This is how he recently encapsulated his wisdom on counterinsurgency:

We have learned above all that, in campaigns such as those in Iraq or Afghanistan, the human terrain is the decisive terrain. We have to understand the people, their culture, their social structures and how systems to support them are supposed to work — and how they do work. And our most important tasks have to be to secure and to serve the people, as well as to respect them and to facilitate the provision of basic services, the establishment of local governance and the revival of local economies.

That’s a fine wish list — and to be fair, Petraeus makes no claims about the success of the US military in accomplishing these aims. Indeed, he concedes that success in the war is likely to go to whichever side is swifter to learn and adapt.

It might not quite rise to the level of being a law of physics, but the capacity for massive organizations to swiftly learn and adapt is about as great as the ability of oil tankers to make sudden U-turns. It doesn’t matter who’s in charge or how gifted he might be in charming the US Congress.

But Petraeus’ problems run deeper than the structural limitations of the military. As Andrew Bacevich makes clear, the US military is now suffering the corrupting effect of endless war. Far from seeing Gen Stanley McChrystal’s recently revealed contempt for civilian command as exceptional, Bacevich sees strong indications that the problem is systemic.

In the seemingly endless wars of the post-Sept. 11 era, a military that has demonstrated remarkable durability now shows signs of coming undone at the top. The officer corps is losing its bearings.

Americans might do well to contemplate a famous warning issued by another frustrated commander from a much earlier age.

“We had been told, on leaving our native soil,” wrote the centurion Marcus Flavius to a cousin back in Rome, “that we were going to defend the sacred rights conferred on us by so many of our citizens [and to aid] populations in need of our assistance and our civilization.” For such a cause, he and his comrades had willingly offered to “shed our quota of blood, to sacrifice our youth and our hopes.” Yet the news from the homeland was disconcerting: The capital was seemingly rife with factions, treachery and petty politics. “Make haste,” Marcus Flavius continued, “and tell me that our fellow citizens understand us, support us and protect us as we ourselves are protecting the glory of the empire.”

“If it should be otherwise, if we should have to leave our bleached bones on these desert sands in vain, then beware of the anger of the legions!”

Stanley McChrystal is no Marcus Flavius, lacking the Roman’s eloquence, among other things. Yet in ending his military career on such an ignominious note, he has, however clumsily, issued a warning that deserves our attention.

The responsibility facing the American people is clear. They need to reclaim ownership of their army. They need to give their soldiers respite, by insisting that Washington abandon its de facto policy of perpetual war. Or, alternatively, the United States should become a nation truly “at” war, with all that implies in terms of civic obligation, fiscal policies and domestic priorities. Should the people choose neither course — and thereby subject their troops to continuing abuse — the damage to the army and to American democracy will be severe.

Whether for an individual or an nation, change often hinges on reaching a point where the status quo is intolerable.

Over the last decade, perpetual war, far from becoming less tolerable has on the contrary become easier to ignore. It is the backdrop to normalcy — just like climate change — in a culture that barely has any sense of gravity.

2 thoughts on “The price of perpetual war”