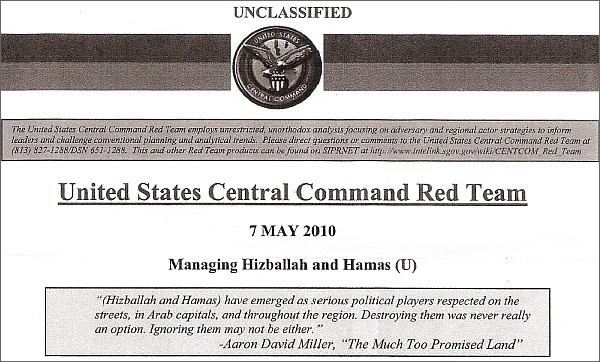 It turns out that Tampa, Florida, where CENTCOM is headquartered (and where General David Petraeus was in charge before being sent to Kabul), is more amenable to the expression of realism.

Since its publication in Foreign Policy yesterday, a report by Mark Perry has been causing a stir. In “Red Team — CENTCOM thinks outside the box on Hamas and Hezbollah,” Perry writes:

While it is anathema to broach the subject of engaging militant groups like Hizballah and Hamas in official Washington circles (to say nothing of Israel), that is exactly what a team of senior intelligence officers at U.S. Central Command — CENTCOM — has been doing. In a “Red Team” report issued on May 7 and entitled “Managing Hizballah and Hamas,” senior CENTCOM intelligence officers question the current U.S. policy of isolating and marginalizing the two movements. Instead, the Red Team recommends a mix of strategies that would integrate the two organizations into their respective political mainstreams. While a Red Team exercise is deliberately designed to provide senior commanders with briefings and assumptions that challenge accepted strategies, the report is at once provocative, controversial — and at odds with current U.S. policy.

Among its other findings, the five-page report calls for the integration of Hizballah into the Lebanese Armed Forces, and Hamas into the Palestinian security forces led by Fatah, the party of Palestinian Authority President Mahmoud Abbas. The Red Team’s conclusion, expressed in the final sentence of the executive summary, is perhaps its most controversial finding: “The U.S. role of assistance to an integrated Lebanese defense force that includes Hizballah; and the continued training of Palestinian security forces in a Palestinian entity that includes Hamas in its government, would be more effective than providing assistance to entities — the government of Lebanon and Fatah — that represent only a part of the Lebanese and Palestinian populace respectively” (emphasis in the original). The report goes on to note that while Hizballah and Hamas “embrace staunch anti-Israel rejectionist policies,” the two groups are “pragmatic and opportunistic.”

To call the Red Team report a “deliberately provocative piece” — as Spencer Ackerman describes it — is to misinterpret the intelligence team’s brief in providing what they do call “unorthodox analysis.”

A Red Team’s approach merely attempts to look at an issue from a broader perspective than the one that military culture engenders. The goal, nevertheless, is objectivity. This isn’t simply an exercise in creative thinking.

Consider, for instance, this uncontroversial observation in the report (written before the recent international outcry demanding a swift end to the siege of Gaza):

The hardships in Gaza may be radicalizing more people, especially the young, and increasing the number of potential recruits for HAMAS. This is the opposite effect Israel thought the blockade would have in Gaza, hoping instead that people would see HAMAS as the cause of their suffering and turn against it.

Yet even today while it is clear to rest of the world that Israel’s divide-and-rule strategy in Gaza has failed, Israel’s deputy foreign minister Danny Ayalon wrote on Twitter: “Our position is to differentiate between Hamas, the occupiers of Gaza, and the civilian population.”

Gaza under occupation — by Hamas!

Ayalon might imagine he’s cleverly modifying the concept of “occupation” but the twist will persuade no one in Gaza, which — an ease to the restrictions on the flow of goods notwithstanding — remains the world’s largest prison.

Indeed, the seeming intransigence of Hamas has been in response to this very fact: that the reward for the moderation that the Palestinian Authority has already exhibited and in whose footsteps Hamas is being implored to follow is not self determination but an occupation with no end in sight. In this respect, Hamas, far from representing the extreme position it is claimed to hold, exhibits a sober realism, which is to say, it sees little evidence that concessions by Palestinians are matched with concessions by Israel.

CENTCOM’s Red Team may have concerned themselves only with the issue of “mainstreaming” Hamas and Hezbollah yet the possibility of that happening may depend less on the internal workings of each Islamist organization and more on the extent to which realism can be mainstreamed inside Washington.

The Obama administration’s support for the Supreme Court’s recent ruling in favor of a ridiculously broad interpretation of the meaning of “material support” (as applied to so-called Foreign Terrorist Organizations and thus both Hamas and Hezbollah) is not a promising sign.